I often talk to one of my dearest friends, Erin O’Brien, about food, creativity, and activism. Our paths crossed when we worked in the food industry together. When I first met Erin, I instantly wanted to be their friend, as they are a beaming light of smarts, arts, and culinary brilliancy. They have served as my model to finding the intersectionalities of all my passions, whether it is about cooking or being socially conscious. As we continued to work together, we both shared the same feelings of burnout and maintaining our wellness in the industry. 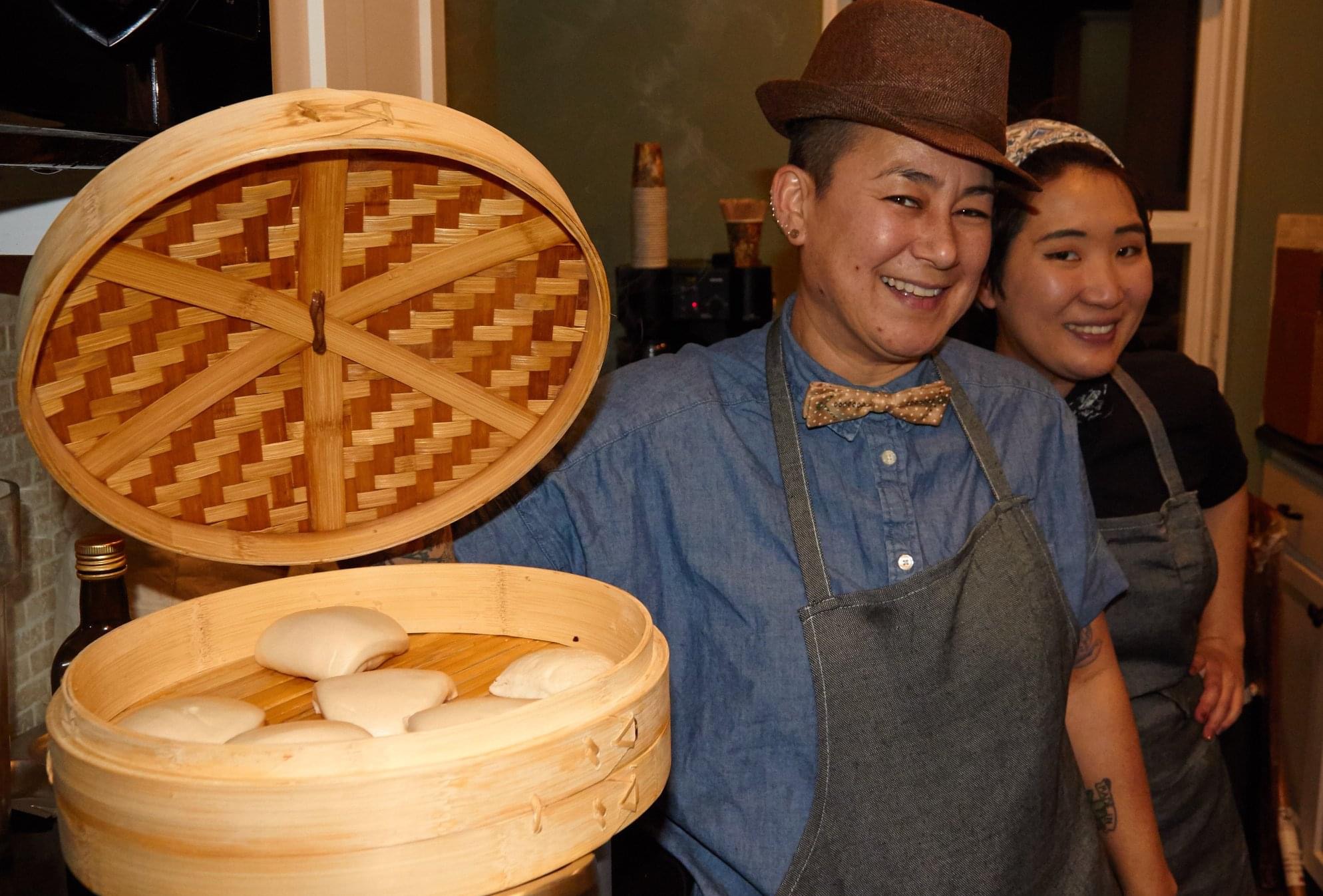 Erin and I working together!

Fast forward to where we are now physically, and mentally; I haven’t been doing that well in the pandemic. I often feel something that can only be closely defined as a numbing dread (or what the NY Times refers to as "languish").  And when I turned on the news and heard about the Atlanta shooting, my brain just started to internally scream. I felt the need to do “something,” and yet at the same time I had no motivation to actually do “it.” I scrolled through my social media feed and came across the guiding light of Erin O’Brien. 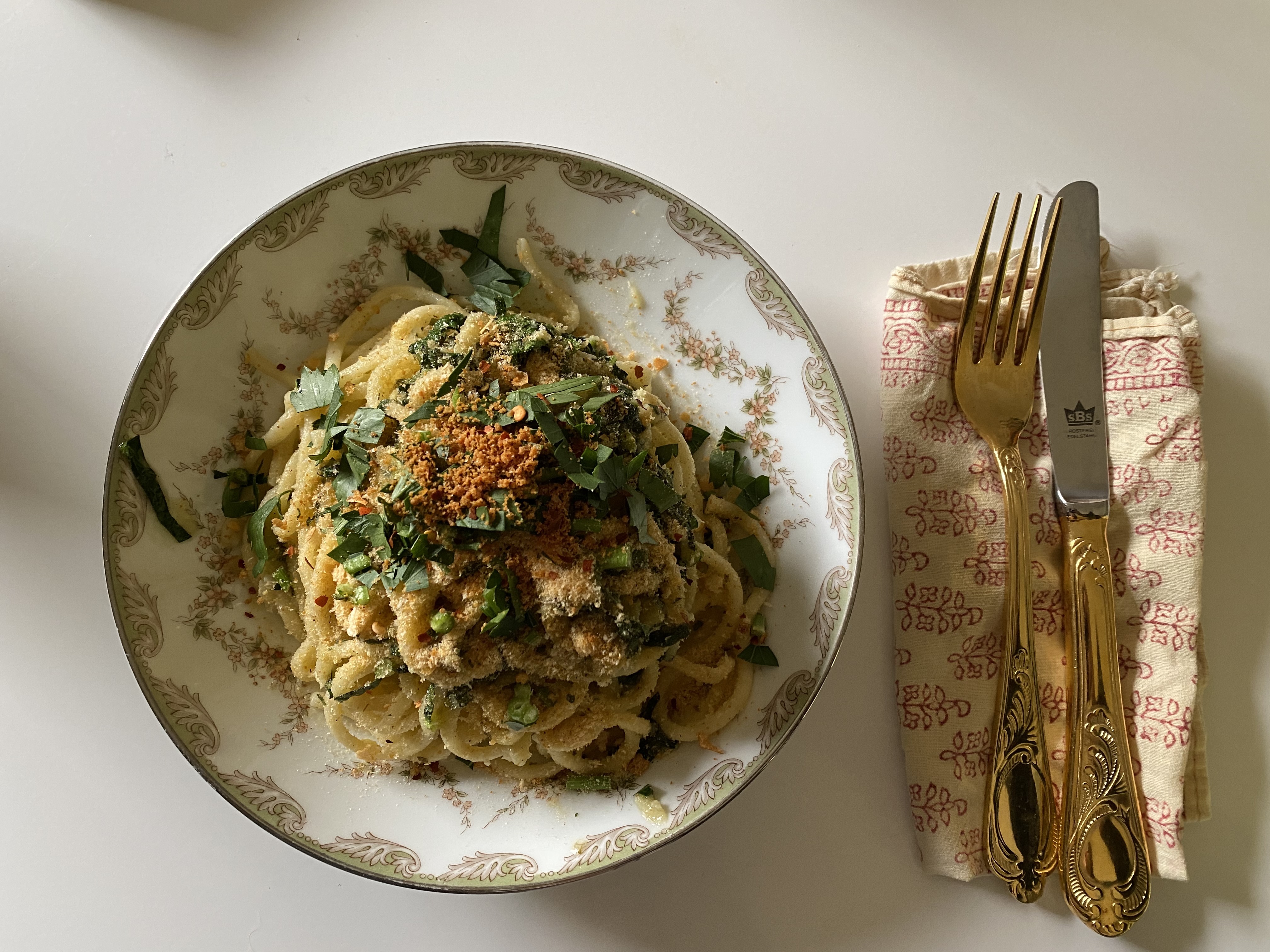 What it is like when Erin invites you over for dinner: homemade meal of artichoke heart pasta!

"After the shootings in Atlanta, I was really distraught and upset and grieving. I had terrible insomnia and I was stress-baking. Then in the middle of the night, I started thinking, I couldmake something that represents all of that pain. I could make this bread as a fundraiser to uplift Red Canary Song." - Erin O'Brien

Erin decided to fundraise for Red Canary Song by selling their own artistic piece de resistance: Mo(u)rning Bread. I knew I had to have this. As we were both vaccinated, we were recently reunited over picking up this bread. I brought over dessert while they invited me to their house for dinner. We caught up over what happened over the year but had deeper conversations revolving around their project, Asian American identity, and overall wellness tied to the pandemic.

"So much of my work is about knowing and understanding and sharing how valuable our stories are. As people of color, queer people, and trans and non-binary folks, our stories are really important." 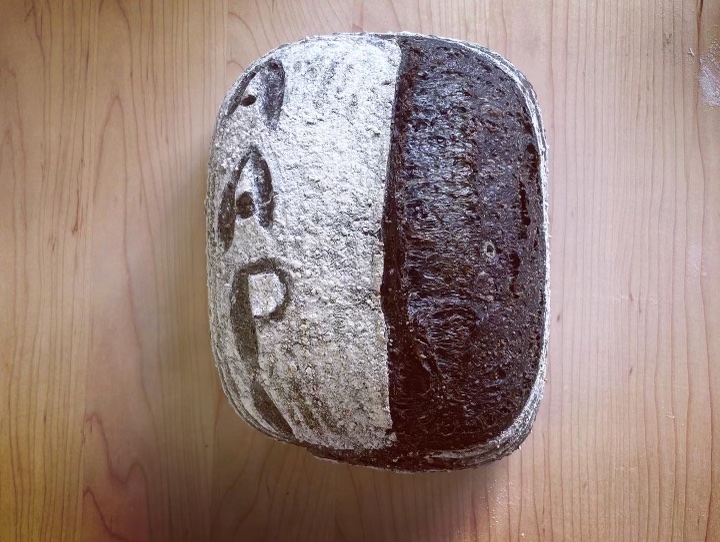 A photo of the Mo(u)rning Bread.

When talking about creating the Mo(u)rning Bread, Erin said, “After the shootings in Atlanta, I was really distraught and upset and grieving. I had terrible insomnia and I was stress-baking. Then in the middle of the night, I started thinking, could I make something that represents all of that pain. I could make this bread as a fundraiser to uplift Red Canary Song. In the wake of the Atlanta shooting, there was an influx of donations to organizations, but Red Canary Song is actively directly organizing massage parlor workers and Asian female sex workers. To me this is so little work being done to organize these workers and to support them in the work that they do. It is one of the most vulnerable jobs. I wanted to make sure they get highlighted in this post-Atlanta moment. I was able to raise $600 for the organization”. 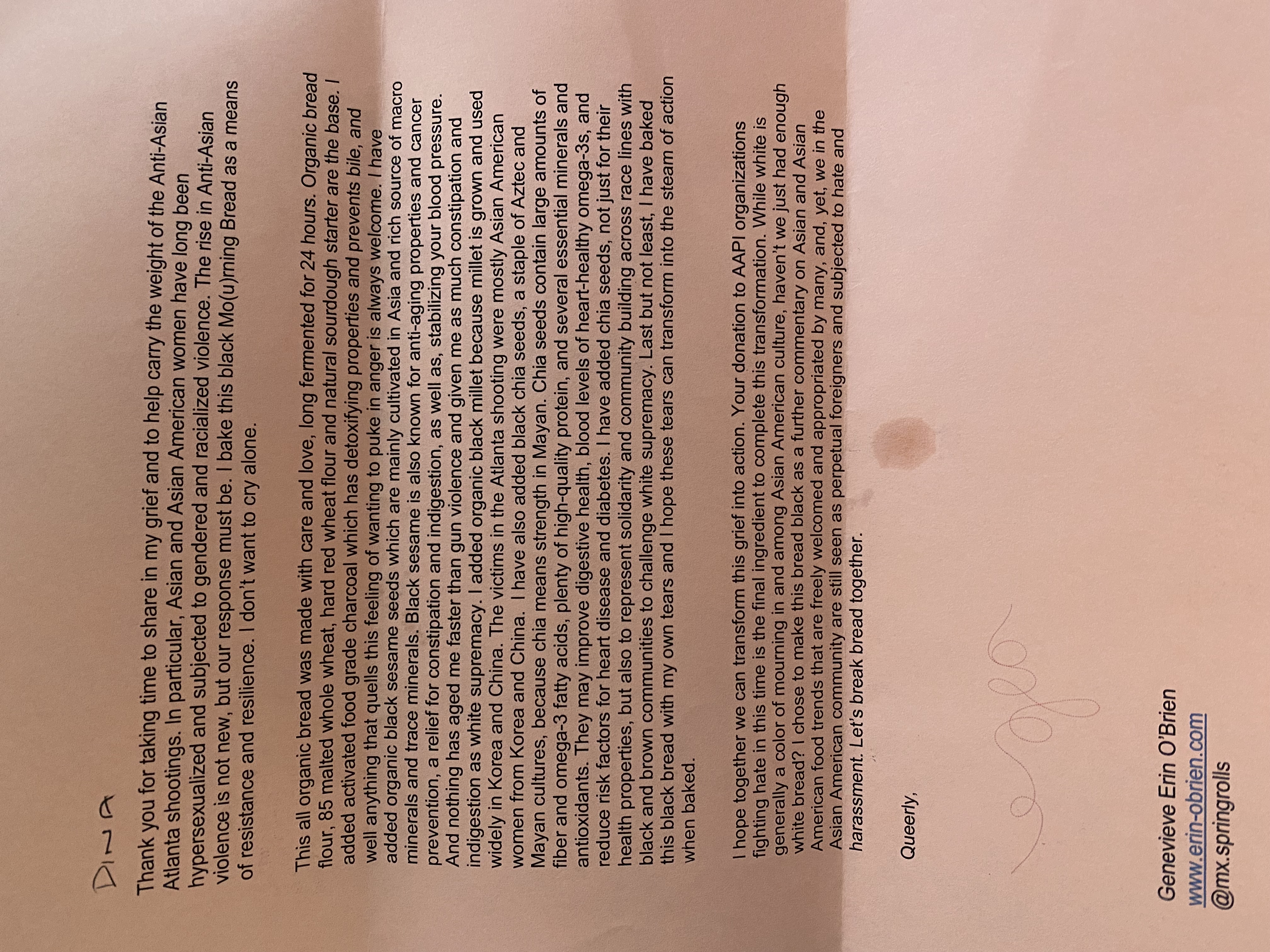 Photo of the letter that came with the loaf of bread.

I started to think about how important creating food has been a part of my life (and Erin’s). When things feel out of control, I turn to baking, as it forces my mind to focus on one task at a time while still allowing creative accomplishment and comfort. But also growing up in an Asian American household where emotions were often hard to directly address, I often think about how baking might have become a way to self-soothe. During our dinner, Erin mentioned, “In Vietnamese culture, they do not ask how you’re doing, but instead they ask if you have eaten yet. I tend to eat my feelings and food is connected to my wellness. When I’m eating better, I feel better. When I’m unwell, food makes me feel better.”

But as Erin and I discussed further, food and emotions are a symbiotic relationship. I often have this philosophy that when you’re baking you cannot be afraid, as most of the time the food can sense that you’re scared and it will not turn out right. The same sentiment was shared from them. “Real wellness is doing the things that you forget make you feel better," Erin said. "When cooking, if you see me making an apple crisp, it’s a sign you should probably ask how I am. As when I am angry, peeling apples refreshes me. But know that things don’t always work as your mood goes into your work. When you cook in an emotional state, it can transfer into the food”. 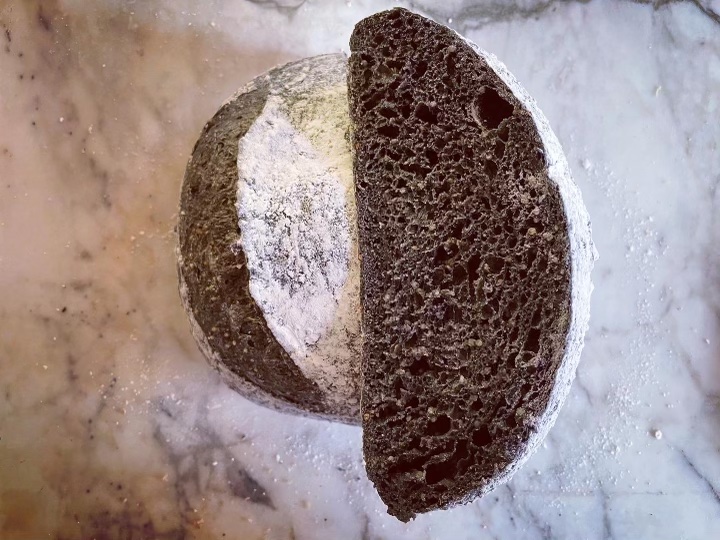 Image of the crumb of the bread.

Transferring this craft into a work of activism is very powerful but often hard to recognize on face value. There is a term that they mentioned that helps define their work: “emotional composting,” where you take your traumatic experiences and turn it into something else. For Erin’s work, we must look past the fact that this is just not a loaf of bread. Instead, it is transforming grief and oppression into something that brings joy and wellness.

“Part of making the bread was to grieve,” shared Erin. “Grieving is a process and we grieve in different ways. I do not like this comparison that racism is a virus because it makes it seem like people get infected and we could fix it. I think it is incredibly damaging. Racism and white supremacy is traumatic; the way it affects your body, your psyche, your memory. I think that racism, sexism, and homophobia all work collectively to tell you directly and indirectly through the media that you’re not enough, not good enough, and that you will never be as good as the dominant. So much of my work is about knowing and understanding and sharing how valuable our stories are. As people of color, queer people, and trans and non-binary folks, our story are really important.” 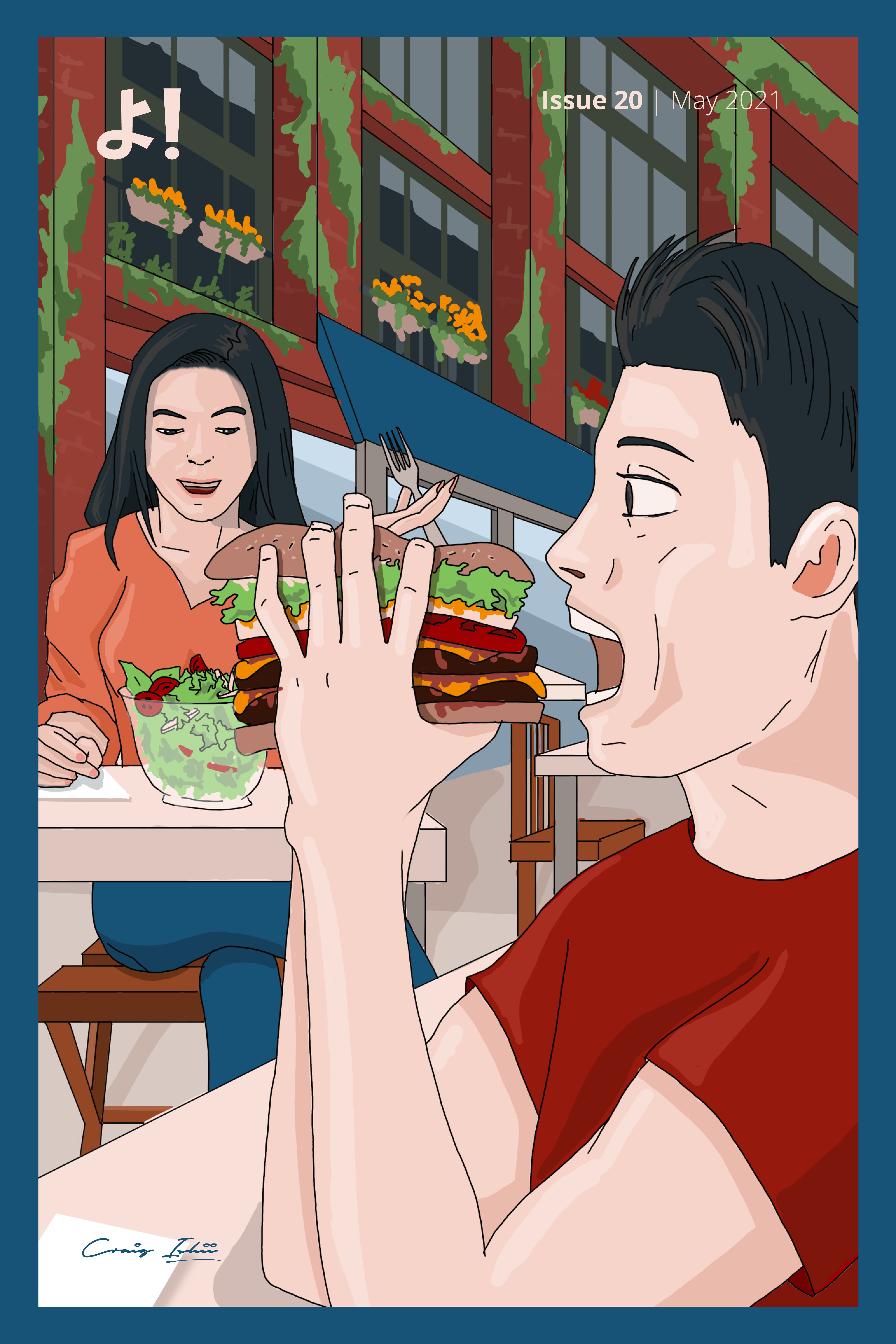