I recently watched the 2009 film Julie & Julia for the first time (shout out to Nora Ephron, and subsequently shout out to one of the biggest Nora Ephron fans I know: my mom). I knew the premise of the plot more or less — some conveniently named gal named Julie set off to cook recipes from Julia Child’s cookbook, pursuing the completion of the project, while on her own journey of self-discovery.

As an avid recipe follower myself (huge respect to chefs and pseudo-chefs who freestyle based on taste on the regular), I am a sucker for a good cookbook or recipe snippet. You’ll find me researching recipes on Pinterest/Google, through my recently inherited Japanese American/Hawaiian community cookbooks, or via text message conversations with my parents. Maybe this is the perfectionist in me, but I love the idea that there’s a correct way in which your food is supposed to turn out — that someone more experienced than I took the time to craft a recipe and formula in a way that is replicable and likely enjoyable 90%+ of the time. 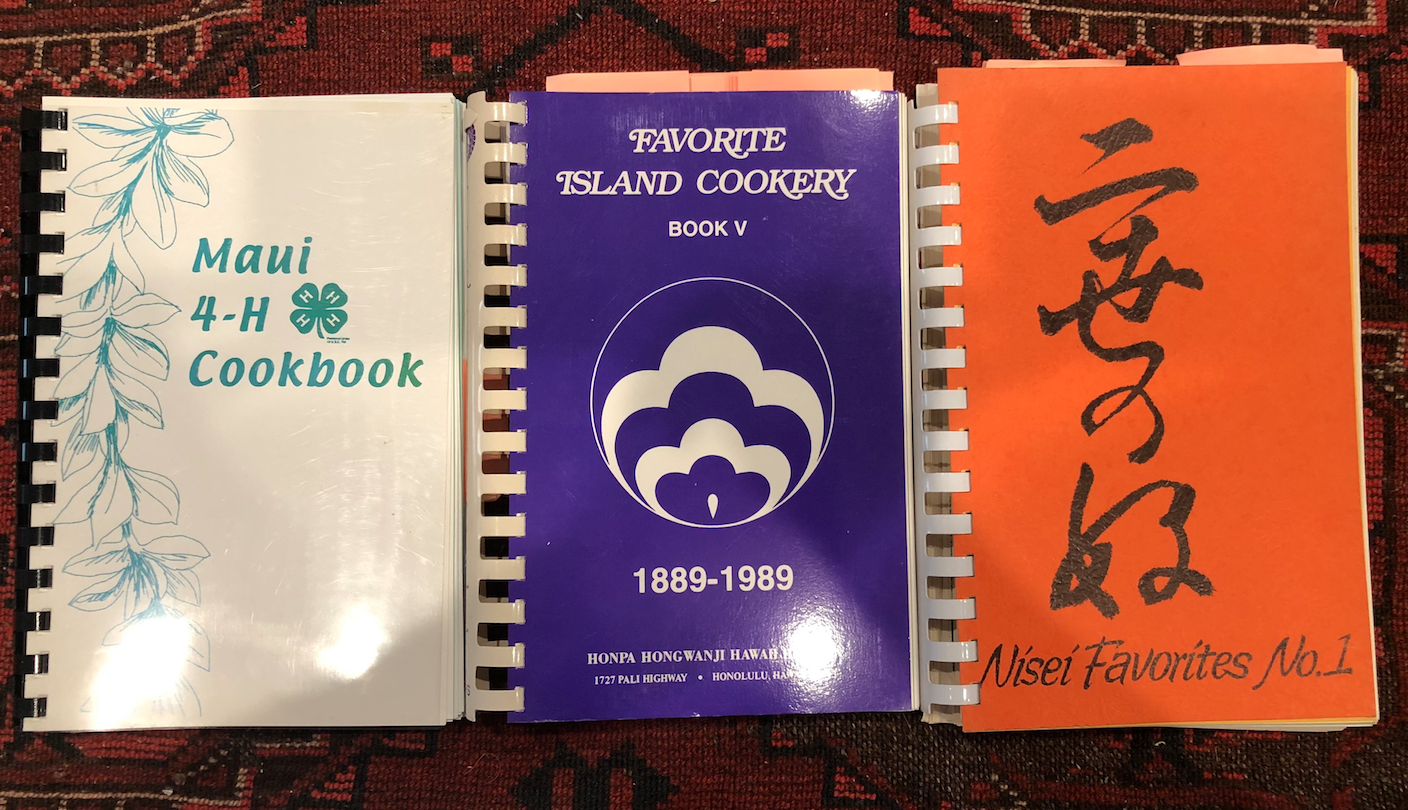 An iconic trio if you ask me - don't even get me started on the casserole portions.

...or so I thought. In my nostalgic cravings on a random Monday night last month, I texted my dad asking him to send over recipes for two dishes I associate with my parents and grandparents: beef tomato and beef stew. I knew my family had written recipes that I could likely follow and replicate, and besides, I’ve eaten these dishes probably 25+ times in my lifetime, I could probably wing it if needed. Narrator voice: which is exactly what she had to do that night.

Let me show you what I was working with: 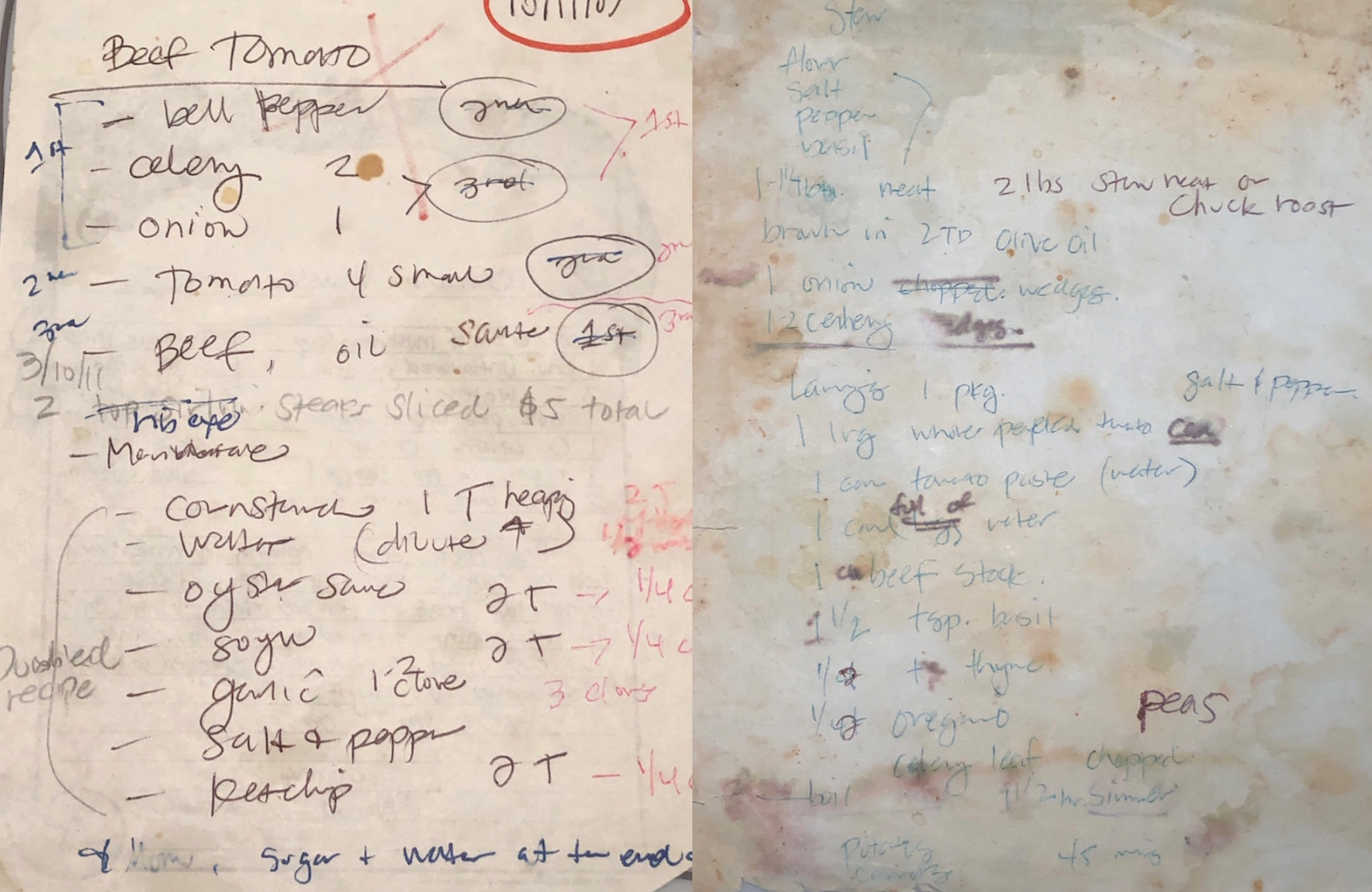 ??? At least my mom's handwriting is nice?

I’m sorry, I thought I asked for a recipe and not a semi-legible grocery list? I laughed to myself when my dad sent these images, but I had already committed and I was hungry. First up: beef tomato. I could not tell you where this recipe came from, but from my experience, a lot of these more homestyle, “poor man’s” dishes are usually comfort food recipes rooted in a lot of lower-middle class, working families with relatively inexpensive ingredients. I tend to gravitate toward those kinds of dishes as I cook for myself, remembering the dishes that my grandparents would regularly cook for dinner for their kids (my parents) and thus passing on recipes to include in regular weeknight rotations during my own childhood. This recipe in particular reminds me of my grandpa who recently passed — eating this at his house on the specific white ceramic plates with blue floral designs and scratches from years of meals shared. Scooping a big pile of steaming white rice and this gravy, meat, and veggie concoction over top (is anyone else’s mouth watering? Just me?)

As I was making my way through the grocery list, there were a few missing pieces to the actual recipe instructions (as previously mentioned). There were numerous revisions to the order of each of the ingredients, adjusted measurements for a double recipe (which I guess is the normal amount?), and an amount of ribeye that’s supposed to total $5 (which in this economy I don’t think means anything anymore). All that to say, I tried my best. I sent a picture of my attempted meal to my family, which was kindly received. No less than 24 hours later, my mom sent a photo of her own beef tomato that she made that night after being inspired by my own craving. I think this is what they mean when they say “expectation versus reality.” 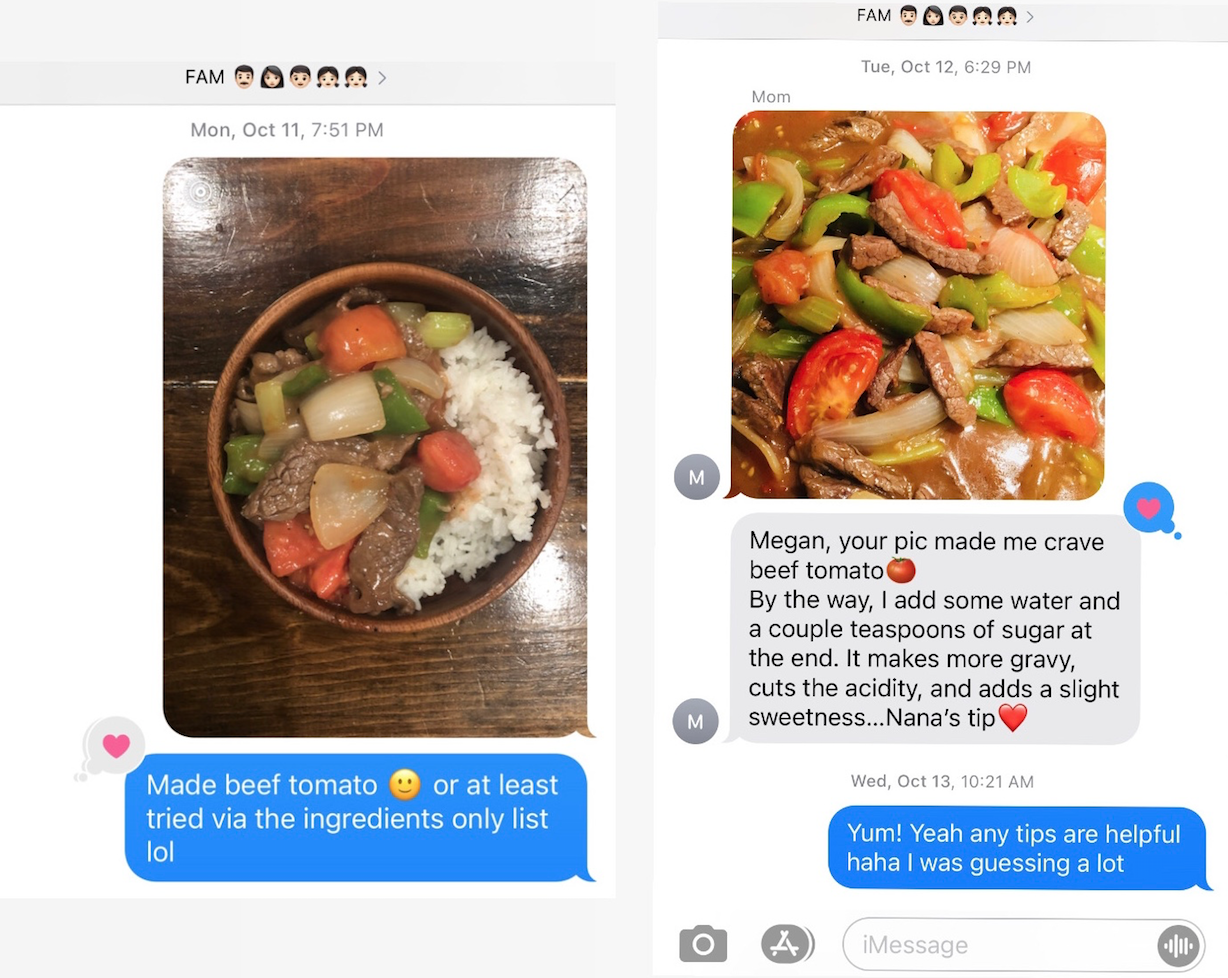 You versus the guy she told you not to worry about

Happy to report that my rendition still tasted great, despite my desire to immediately have my mom’s instead. I know she has several more successful attempts at the dish than I, as well as far more beef tomato meals that she ate on those same ceramic plates in her childhood home with my grandparents. One day I’ll nail it, but in the meantime, I’m having a pretty good time getting to try. Check back for when Nora Ephron reaches out to direct my Julie & Julia rendition.

More by this author >>
Related Articles in
Food & Recipes
Family

What to get your friends’ kids

Article featured in this issue:
November 2021
Danish Nostalgia: Understanding My Parents’ California
By,
Pauline Ordonez
8 Things You Remember If You Had AZN Pride
By,
Michelle Hirano
The Non-Definitive List of How to Avoid Faux Pas at Asian American Functions
By,
Megan Nagasaki
DnD - Dice Advice
By,
Mariko Fujimoto