Collegiate taiko has had a prolific expansion over the last couple of decades. Let's explore how it's grown and where it still needs to go.

To say that collegiate taiko was a significant part of my experience in higher education is an understatement.

The four years of my experience in Kyodo Taiko at UCLA were some of the most formative personal, cultural, and extracurricular experiences that fundamentally altered the direction of my life, an experience only rivaled by my other Japanese American community experience on campus, the Nikkei Student Union (NSU).

Even though it's been a few years since my time on campus ended (maybe a bit more than just a "few years"), it remains a formative experience. Generations of classes and countless players have had similar groundbreaking experiences as the art form has proliferated across the national landscape of higher education.

Let's take a look at where collegiate taiko has gotten to and where it still needs to go. 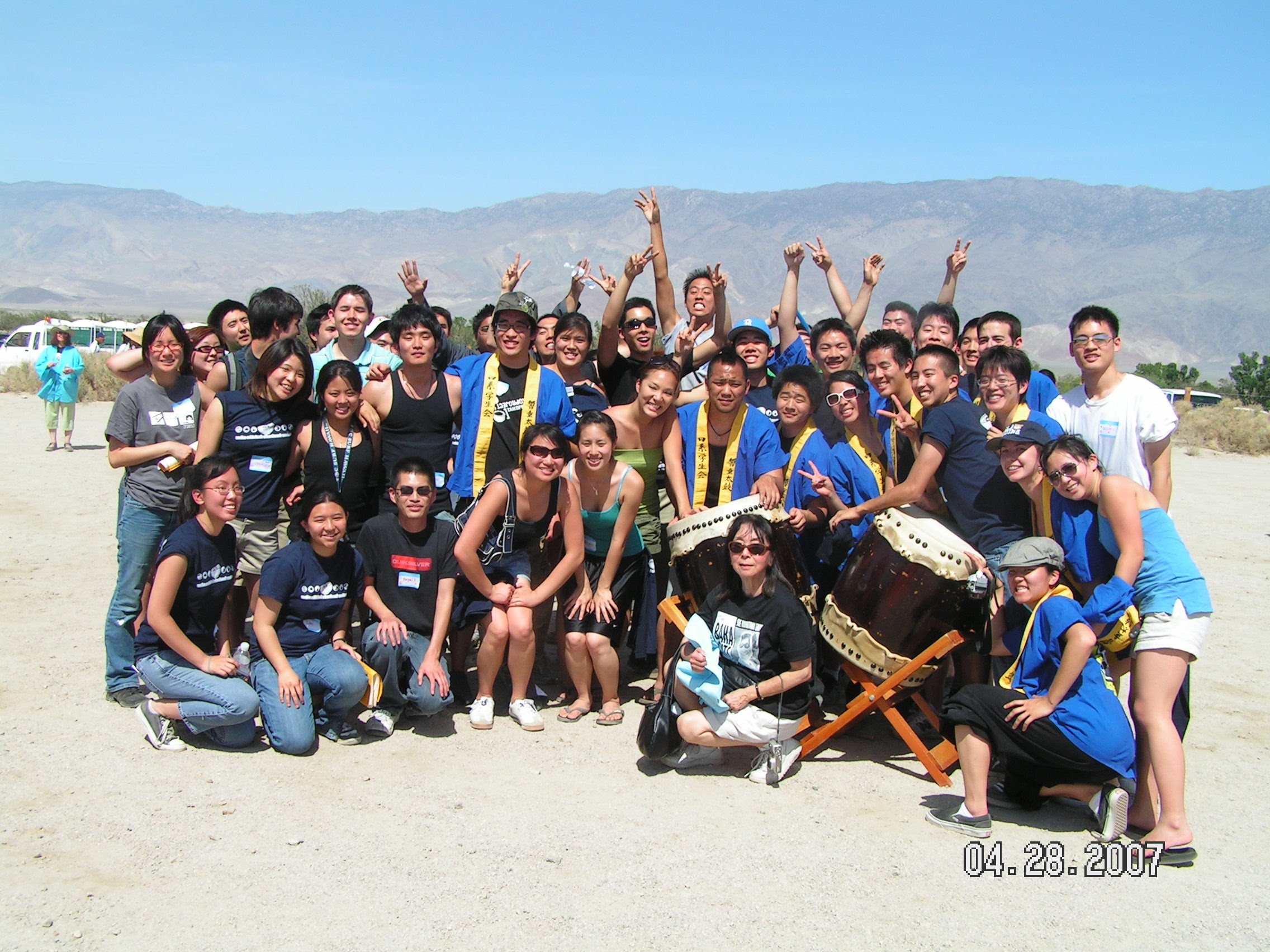 The Phenomenon of Taiko

Let's level-set before we start. The birth of modern taiko as we know it is, in itself, a phenomenon. While the roots of the taiko drum can be traced back to ancient Japan, taiko as a group-based art form is relatively recent; invented post-war, and expanded upon only within the last 50 years.

Even more incredible, the art form is Japanese American; that is: Japanese and American. Daihaichi Oguchi, credited with developing kumi-daiko, or ensemble-based taiko drumming, in 1951, was a jazz drummer who wondered why taiko couldn't also be performed as a group.

By the late 60s, the first taiko groups popped up in North America, followed steadily by groups starting in community centers and churches across the country. By 1990, it was time for taiko to enter the college scene. As seen below, within two years, taiko was founded at UCLA, UCI, and Stanford with slow expansion to additional campuses, followed by an exponential growth in the following decade.

I'll admit thatback in the early 2000s, with most other groups being relatively new, we always had a healthy rivalry with Stanford Taiko and UCI Jodaiko, but now, I can't even imagine keeping track of all the repertoires and players. The sheer number of collegiate groups is astonishing. 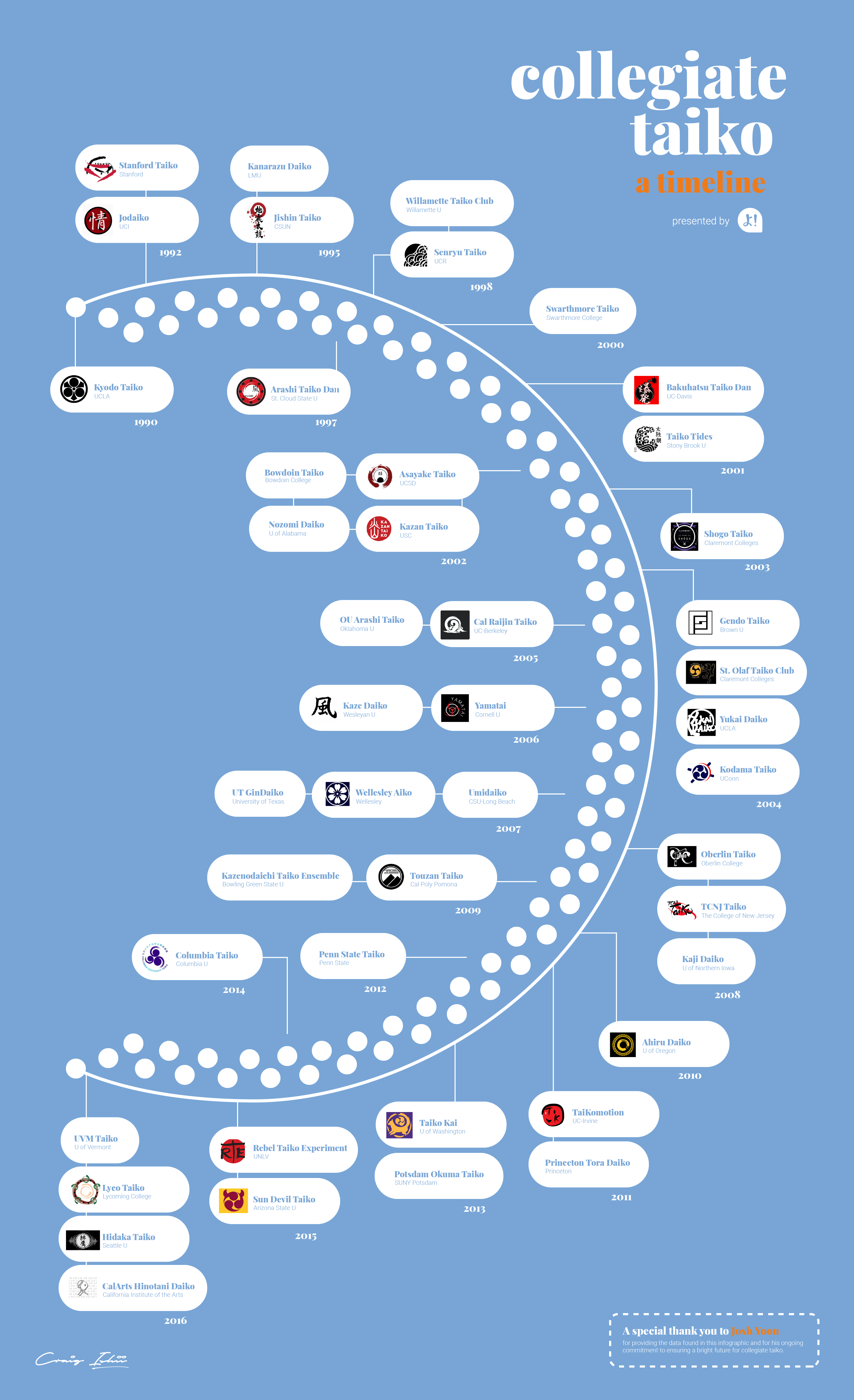 Click here for a larger version of this image.

How did this happen? How was collegiate taiko able to spread at such incredible speed? With the multitude of Japanese cultural art forms, why taiko?

I (virtually) sat down with Josh Yoon, a board member of the Taiko Community Alliance, who's conducted years of research and workshops specifically on the phenomenon of collegiate taiko.

By the 90s and early 2000s, there were a number of youth players coming from previous experiences at churches and community centers. As Yoon was explaining this, it certainly rang true for me. Coming from seven years of taiko at the Orange County Buddhist Church's Daion Taiko group, seeing Kyodo Taiko play at the welcome week orientation and NSU general meeting quickly sparked an interest in continuing my journey.

Then there's the proximity of students, facilities, and underground parking lots (yeah, this is a thing, you can't just drag a booming taiko drum into an outdoor park or the quad, so you find yourself a nice cement-surrounded corner of an obscurely located parking garage). In the same way that student organizing, volunteerism, and activism seem to be at an all-time high on campuses, Yoon described how this same energy helped fuel the creation of groups. 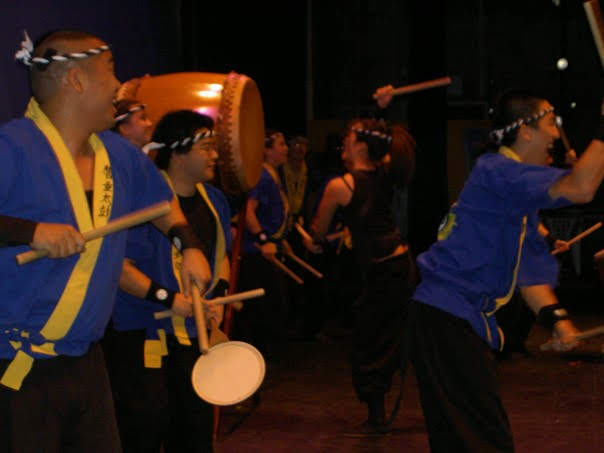 Finally, there's the larger community. With taiko leaders who could offer knowledge and expertise and groups serving as examples, the greater community was a scaffold helping to guide and inspire groups on campus.

With only four short years for learning, leading, and legacy, taiko offered a cultural art form with relatively low barriers to entry, with room for the development of individuality and group personality. Yoon described the speed at which groups could learn songs and the opportunity for traditions passed down from generation to generation.

I sat in awe of how clearly and accurately Yoon was able to describe my collegiate taiko experience. I recall, as a freshman, quickly learning songs on Tuesday and Sunday so we could be performance ready for a gig the following Friday. Then, years later, sitting with my two best friends in their apartment (slightly intoxicated), remixing those very same songs for our spring concert, not realizing that the group would still play those very remixes over a decade later.

After the fastest four years of my life, I found myself graduating from college and Kyodo Taiko and looking for a new outlet to keep taiko in my life. While my co-graduates and I founded a small group called Progressive Taiko (later shortened to Prota) and had a few last hurrahs of the good 'ol days, I eventually settled back in as an instructor at my old stomping grounds at Daion Taiko. Over a decade-and-a-half later, I'm still here.

Yoon described this as the key legacies coming from the spread of on-campus taiko: a symbiotic relationship between collegiate taiko and the greater community. In the same way that campus groups were beneficiaries of the greater taiko community's inspiration, experience, and expertise, they also served as a benefactor through their graduates. Many post-collegiate players have gone on to play with or instruct community groups; some have even founded novel groups of their own.

Let's Not Forget Where We Came From

As incredible as the expansion of collegiate taiko has been, there's still a long journey ahead. I spoke with Roy Hirabayashi of San Jose Taiko about the key challenges facing this community in the years ahead.

I've known Roy before he knew me. Together with his wife PJ Hirabayashi, the two have served as pillars of the taiko community and the greater Japanese American community. With their decades upon decades of activism, vision, and leadership, their community stories and experiences have served as the inspiration for many of us as players and community volunteers.

But it is in the telling of that history that our groups are sometimes falling short. "Learning the history and the connection to the community is not always part of the plan. When having to choose between history and skill, groups usually choose skill," Hirabayashi said. 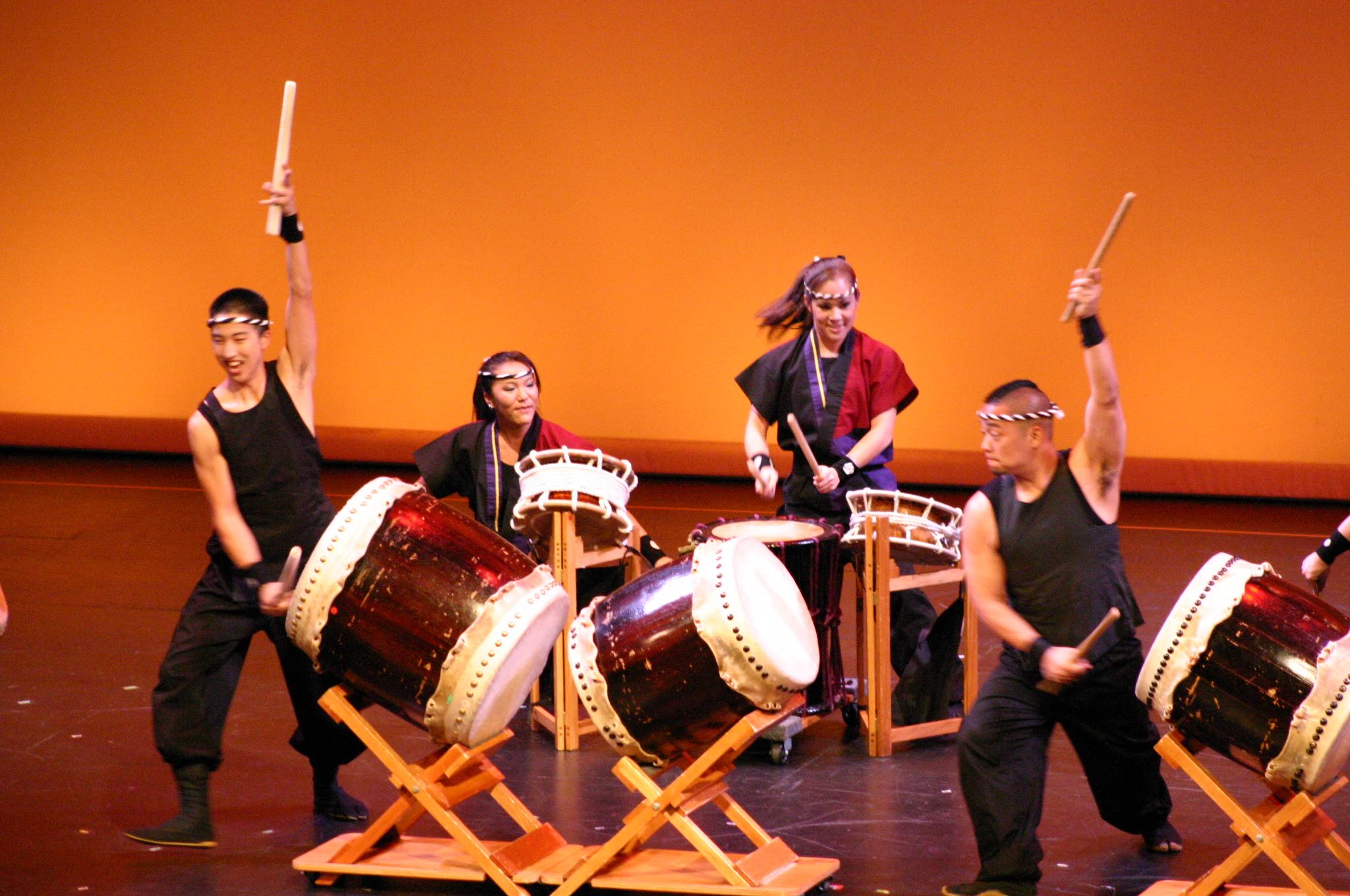 This, of course, is not limited to taiko. Let's think about basketball teams in the community, Japanese American scout troops, community centers; how many people know the history behind the activity? When choosing between perfecting your three-point shot or the segregated history of Japanese American basketball, the latter is usually forgotten.

Thinking about the who, what, and when is key. "How do we best tell the story? Who's gathering it? Who's telling it? Are we sharing it just within our group, or are we using gatherings like conferences and group invitationals to share it?" said Hirabayashi.

Taiko groups can think about this effort as an investment in their present and future. A player educated on a group's history will personally identify the challenges and achievements of the group's past. This personal connectivity to the past creates a more substantial commitment to the group's future. In addition, a player educated on the community history and significance of taiko will better appreciate the importance of taiko beyond the art form.

Those at Daion Taiko know that we annually hold a "hands-off workshop" where we talk about the history of the taiko and the importance of community. I can't tell you how much this two-hour workshop alone has done to build a deep-seated appreciation for the culture, community, and art behind the drums.

It's always hard to end an article with a feeling of angst, but the single biggest concern from both Roy and Josh was getting collegiate taiko back on its feet after over two years of hiatus.

I remember walking into our first "socially distanced" practice after the quarantine was lifted. We hadn't held any practices for two years as taiko, and virtual distance learning doesn't really go hand-in-hand. As I entered, I remember being shocked at how tall our kids had grown, reflecting on how much of their life we had skipped, and missing two years of seniors to whom we didn't have the chance to say the proper goodbye.

Imagine this scenario, but with no instructors returning.

"It's been a two-year gap. Collegiate groups have lost their peer leadership their institutional memory, and on top of that, they're still facing a short time frame with the remainder of the school year. It's going to be a tough re-boot," said Hirabayashi.

But with these difficulties, there's still community.

In 2020, during the thick of the pandemic, Yoon and members of the Taiko Community Alliance developed the Collegiate Taiko Community Management Committee with the charter of providing support to on-campus groups. "We sought to offer institutional memory, listen to what's going on, and respond to the needs and wants of collegiate groups," said Yoon.

So while times are especially difficult, a support network still exists. Groups may need to think about leaning on alumni to help with their re-boot. Community leaders and community groups can also be a resource, and with the return of students to campus, perhaps just a little extra practice time (yes, in that underground parking lot) will be that extra measure needed so that you never skipped a beat.

Article featured in this issue:
March 2022
What is Ikebana?
By,
Brandon Yoshio Paris
Dear Ji-Chan
By,
Kayla Tanaka
This is the Way
By,
Andrew Takahashi
The Evolution of Collegiate Taiko
By,
Craig Ishii

How do generational differences affect opinions of cultural arts and their importance? You want to know, and so do we.

Thank you Ji-chan for teaching me and exposing me to Japanese art forms. Your efforts to teach me about my Japanese culture have not gone unnoticed.

Collegiate taiko has had a prolific expansion over the last couple of decades. Let's explore how it's grown and where it still needs to go.

This is the Way

It’s not the destination, it’s the journey. And if you guys can understand that, then what you’ll see happen is that you won’t accomplish your dreams, your dreams won’t come true; something greater will.

It is our hope that the taiko community never loses sight of its roots as it works toward an inclusive and collaborative future that celebrates individual uniqueness and cultural diversity.

Ikebana is a long practiced Japanese art. This is my experience practicing it.

Going Bananas During Quaran-bean: My 6-Day Enforced Quarantine in Japan

With the sudden surge of covid over winter break, Japan has completely shut down their borders to foreigners, and made it very difficult for Japan passport holders to enter Japan. Here's my story.