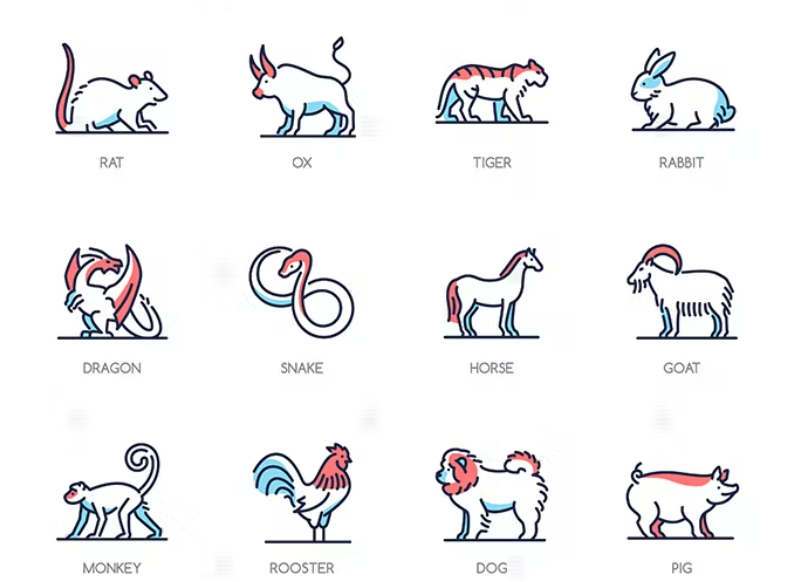 The Basic of the Chinese Zodiac

Feel free to skip past this if you're already familiar with the animals associated with the Lunar New Year, but it's always good to start with a strong foundation to make sure we're all on the same page.

There are 12 animals in the Chinese Zodiac. Unlike the animals of the western zodiac, animals are associated with year of birth, rather than month of birth. These are the 12 animals:

Similar to the western zodiac, each animal is said to have core character qualities common to the individuals born during that year. Providing character descriptions for each animal would make this article far too long; just search "Chinese zodiac" or "lunar new year zodiac" and your search engine will give you a multitude of sites where you can input your birthdate and learn about your associated zodiac animal.

Alright basic complete - on to the finer details.

I find people often mistakenly associated Chinese zodiac animals with year of birth. While that's correct for 10 out of the 12 months of the year, it's critical to remember that the Lunar New Year is NOT January 1. The Lunar New Year is based on moon cycles and fluctuates in date from year to year. That being said, individuals born in January or early February may not be associated with the animal that categorizes the remainder of the year. Instead they're associated with the animal of the previous year.

Personal anecdote - being born in 1985, for years I thought I was year of the Ox. However, the description never seemed to match:

"Oxen are honest and earnest. They are low key and never look for praise or to be the center of attention. This often hides their talent, but they’ll gain recognition through their hard work."

Ha. For those who know me, we can find a number of different issues with this description. Honest and earnest, yes, but "low key," "never look for praise," "never want to be the center of attention," umm have you met me before?

Then I realized I was born in mid-January and that I was actually the year of the rat. Check out this description:

The Rat is the first Sign of the Chinese Zodiac and is born under the sign of charm. He is intelligent, popular, and loves attending parties and large social gatherings. Rats are very thrifty. This is purely because he likes to keep his money within his family.

There we go. Center of attention, check. Stingy, check. Also, check this out:

"The Rat is the first of all zodiac animals. According to one myth, the Jade Emperor said the order would be decided by the order in which they arrived to his party. The Rat tricked the Ox into giving him a ride. Then, just as they arrived at the finish line, Rat jumped down and landed ahead of Ox, becoming first."

...yeah that also sounds like something I would do.

Rather than writing out the story - check out this 4-minute animated video. Tells you about the race and gives you some insights into the core personality traits of each of the animals

Animals Have Compatibility With Other Animals

Here's a fun activity to do with your partner, look up your respective zodiac animals and find a site that describe your compatibility with each other. Similar to western astrology, certain animals are said to be more compatible than others. Compatibility occurs in four year increments with the highest compatibility between animals 4 lunar years apart. See the image below: 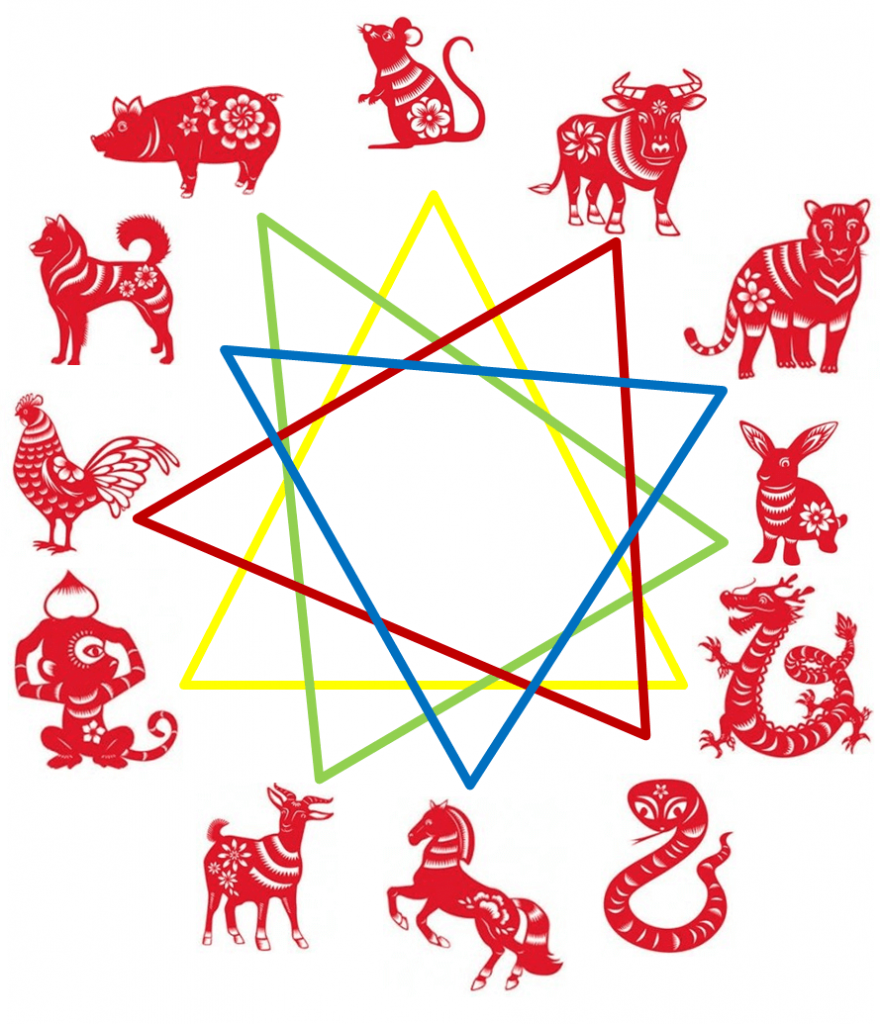 Now that being said, the equation of course doesn't take into account the human ability to compromise, adapt and grow in the name of love; use the compatibility as a starting point to better understand and appreciate your partner; or use it as the butt end of a joke to have a good laugh together.

Your Year is NOT a Good Luck Year

With all of the paraphernalia and hoopla around celebrating the year of [insert animal year] it's easy to think, "this is my year!" In reality, the year of your zodiac is your "watch out" year. With regards to career, love, family, and friendships, the idea is to tread lightly and be careful.

There are Elements Associated with 12 Year Cycles

In addition to the 12 animals of the Chinese zodiac, there are also five elements, each element associated with a 12-year cycle. Those elements are:

Similar to the 12 zodiac animals, each of these elements provide additional primary characteristics common to these individuals.

Grief That’s Worth Its Weight in Gold

Article featured in this issue:
February 2022
What Reality Dating Show Should You Watch
By,
Scott Shima
Hello, from the Middle
By,
Stephanie Nitahara
With Love for Our Community: Building Community with J-Town Action と Solidarity
By,
Gianna Furumoto
Nuances of the Chinese Zodiac
By,
Craig Ishii

Through a friend of a friend. Isn't that how most people meet their significant others?

Hello, from the Middle

It’s hard to explain why working with JAS is so important to me. Showing up in action and solidarity with love for our community and a revolutionary vision for the future just feels like the right—and sometimes the only—thing to do.

Add these iconic Little Tokyo spots to your date-rotation. Bonus points if you hit them all in one go!

Lisa and Steven answer some relationship questions from the Yo! editorial team.

I'm not big about hugging. But is it because I was raised that way?

3 Generations respond to 1 topic. 15 questions. In this issue: LOVE.

We Have to Talk About Queer Love in the JA Community

February in the JA community is filled by two major holidays: Day of Remembrance and Valentine’s Day. Let's honor both by re-evaluating how we look at gender, pronouns, love, and identity with our youth.

With just a few tips, you can enhance your local grocery store flowers (or flowers picked from your backyard) into a thoughtful arrangement that will reflect your true feelings.