Following my earlier published diaspora photo essay, I reached out to several friends to learn how they observe New Years, or Oshogatsu in Japanese. I love learning about how other people live, what their upbringing was like, and seeing how we can share similar experiences but also have different ones that we can all celebrate. 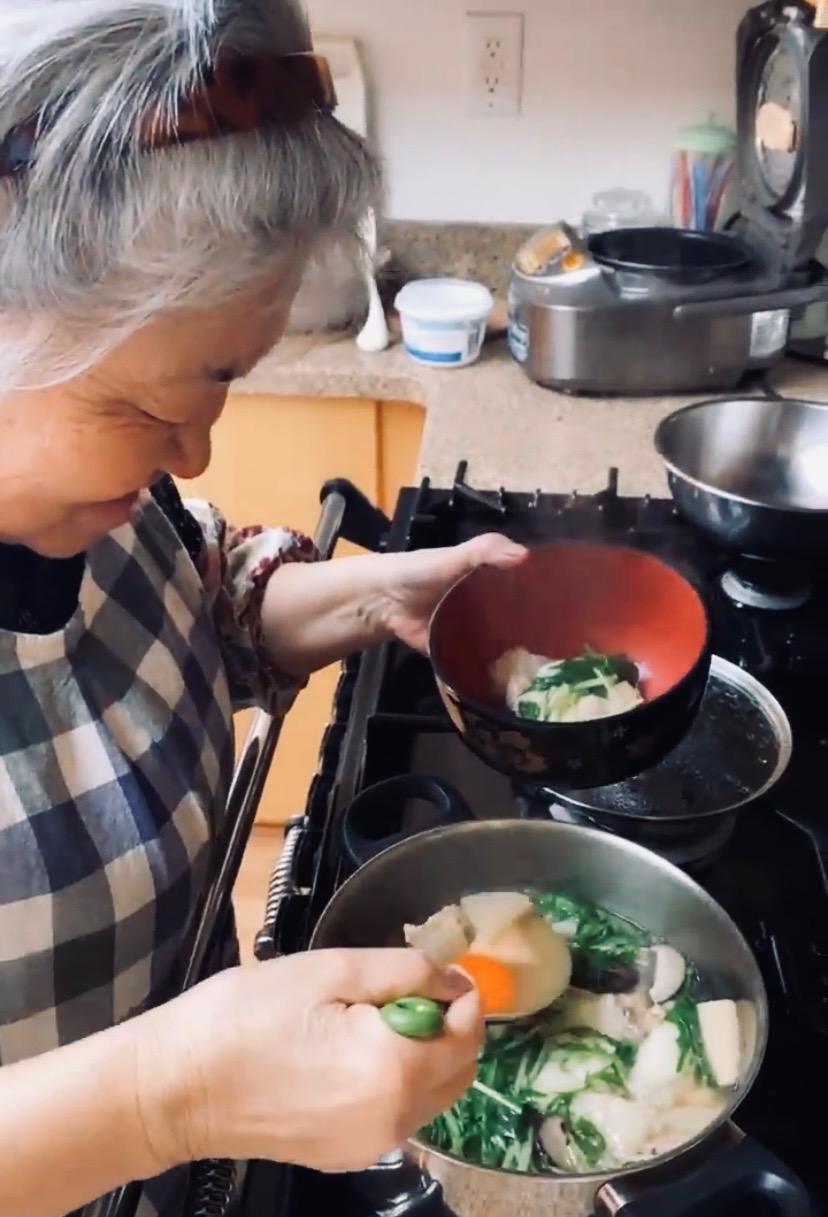 Like many Japanese households, mine involves my mother cooking ozoni and as of the last few years, we've had a friend deliver us fresh mochi for this meal that always marks the start of a new year. In a time where other events that would cap off a similar sentiment still can't happen, this was a quiet start for 2021. My mom has often been the surrogate mom for many of the Japanese kids now turned adults who couldn't visit home to enjoy their family meal, but this year, we simply toasted to being able to fill the empty seats for the following year. Here's to another year started with a hot bowl of the best soup that you can only eat once a year, served with love and eaten with a smile. 今年もよろしくお願いします. 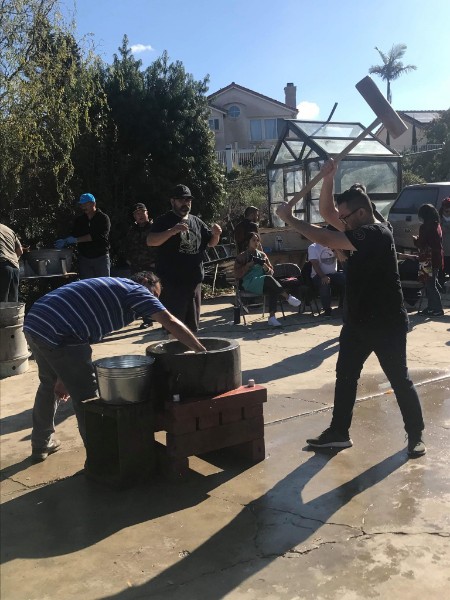 I always look forward to gathering with relatives on that cold Saturday morning in December as we steam, push, pound, and mold mochi. I will always be grateful to my various relatives who, year after year, continue to carry on this mochitsuki event. As the legend goes, our family has been holding a mochitsuki every year since they arrived in America, which makes it a 100+ year tradition! It would be so easy to purchase mochi from the store or purchase a machine to reduce the heaving lifting required to make mochi with usu and kine, but, mochi-making wouldn’t feel the same. And as the grains of rice are gathered and molded into one unit, so is our family (at least for that one day in the year). 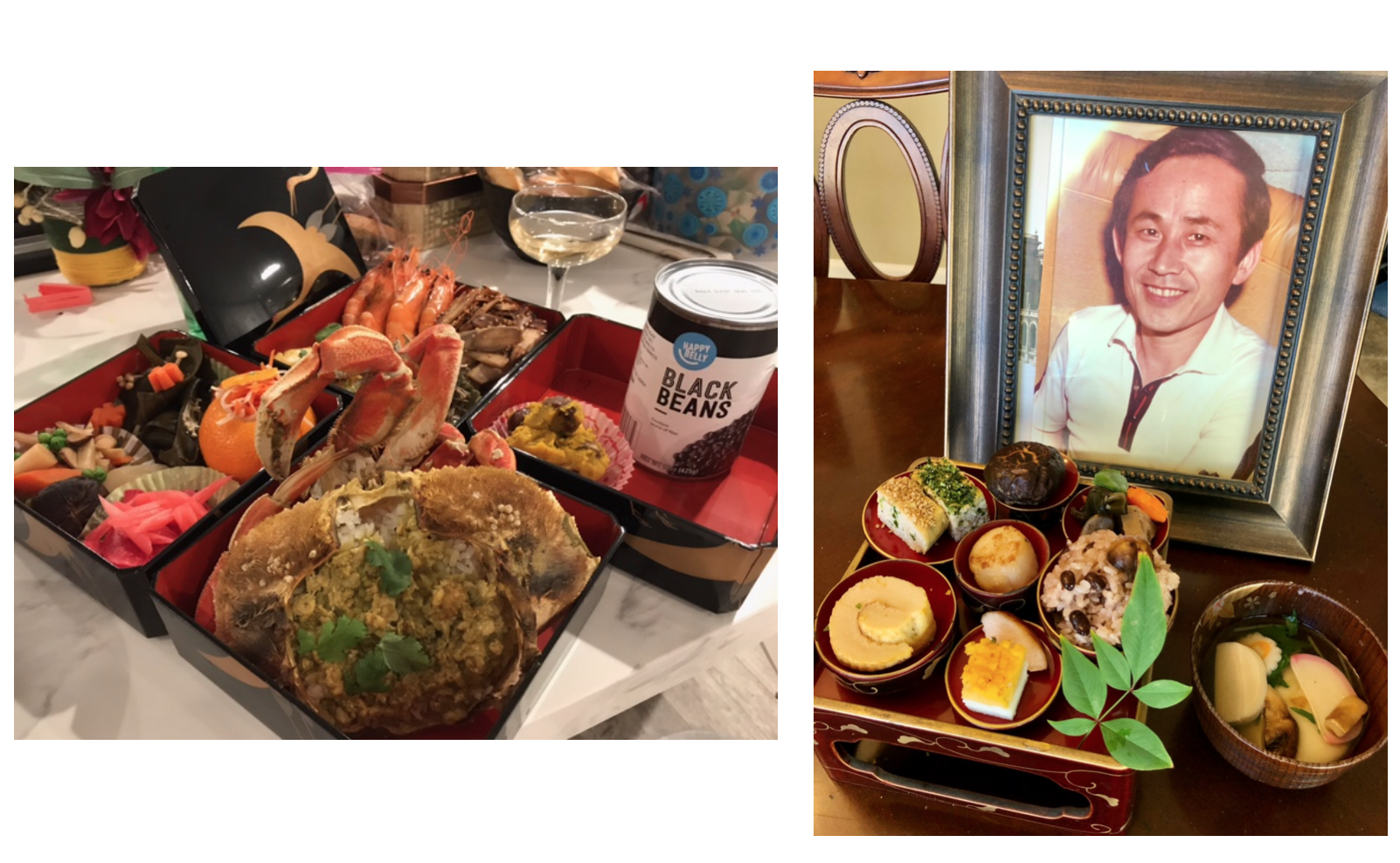 Born and raised in a Japanese household in California, my family and I would watch kouhaku while enjoying a bowl of toshikoshi soba on New Years Eve. My family was good about getting their oosouji (cleaning) done in advance to get ready for the new year. We didn’t have osechi ryouri every year but we always ate well, especially during the holidays. We absolutely love cooking and dining together.

This year, I managed to make osechi for the first time; it was more of a Californian style “osechi'' which made me happy as it defines who I am as a chef. Since I couldn’t celebrate with my mom, aunties, and grandma this year, we all exchanged beautiful photos of our juubako feasts. My obaachan would make mochi every year for New Years as she still does today. She used to make mochi with yomogi (mugwort) that her family harvested from her hometown in Yakushima. It is by far my favorite and the best mochi I’ve ever eaten!

Pasadena Gakuen, the Japanese school I attended for 12 years, did a wonderful mochitsuki party every year teaching the children the Japanese traditions. When I was living in Northern California for the past decade, I was lucky and grateful living near my auntie who kept the tradition of making osechi and mochi each year. Hopefully, we will all soon be able to celebrate and rejoice with the rest of our families and kanpai in person.

January first has always been a special day for our family.  Every New Year’s morning, starting in the early 1950s, my great-grandfather Hachiro Yoshino would go on a hike in Griffith Park, California, to reflect and watch the first sunrise. Afterwards, he’d hike down, gather his family, and return with them that same morning. He’d say, “It is too early for the family to wake up.” On or around the year 1980, he was diagnosed with cancer and continued to hike with the family. After his passing a few years later, the family continued to hike and watch the first sunrise of every New Year. Now, 70 years later, five generations across multiple states and time zones continue his legacy, taking a walk, reflecting on the previous year, and watching the first sunrise together. 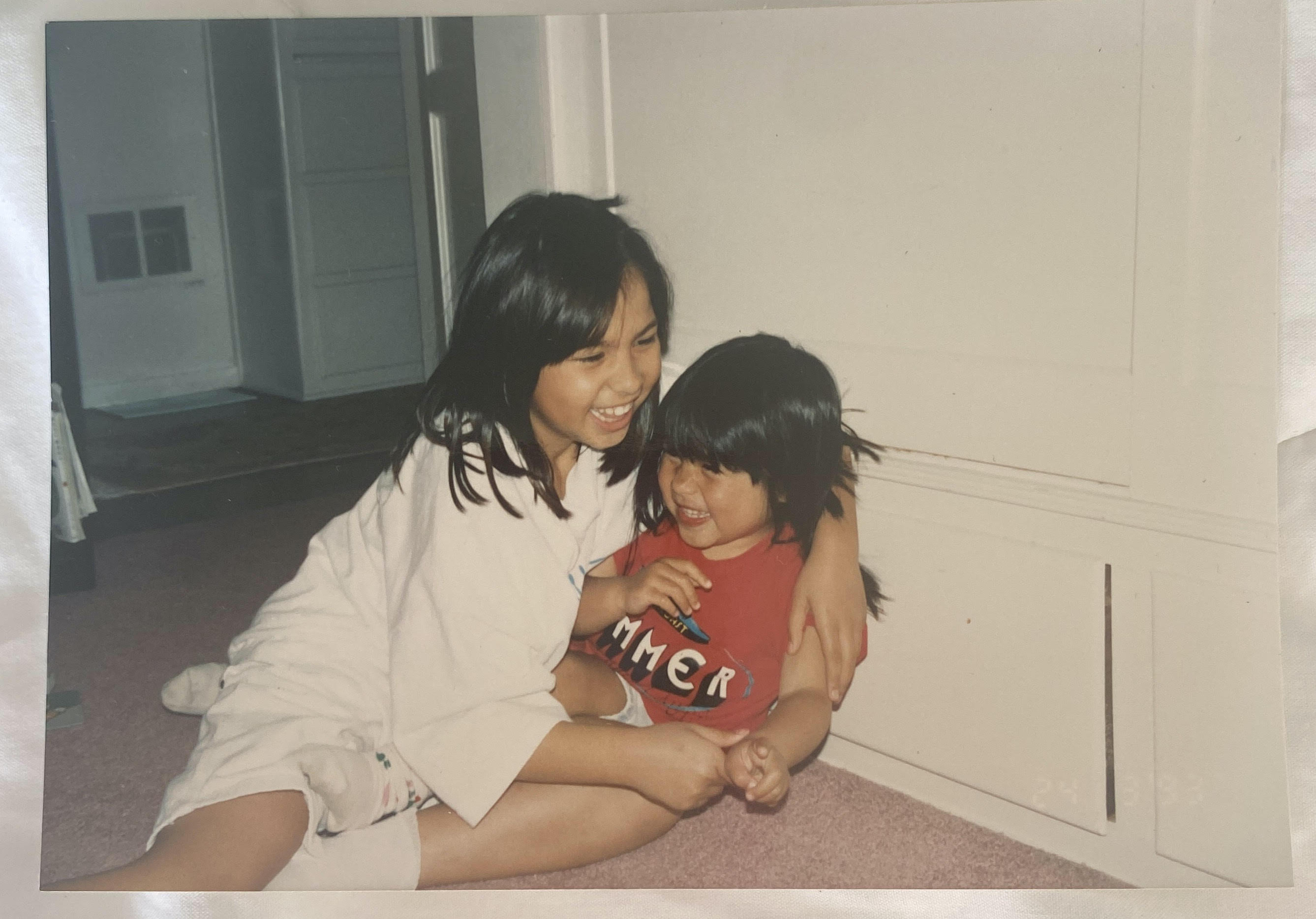 I spent my elementary days in New Jersey, where winter was very cold.

My mother, who is Italian, spent some time living in Japan after marrying my father, who is Japanese. She learned how to cook Japanese food and absorb culture wherever she could, and would be able to graciously showcase her knowledge by the Osechi Ryori she would make with my older Sister Mayumi. I remember the sweet flavor of Kuri Kinton, which would contrast the crunchiness of the Kazunoko, or the marinated flavor of konbu. My favorite was the ozoni soup. With grilled mochi, that has soaked a bit of the dashi. If my mother was able to find Mitsuba and Yuzu at the market, it made it even more special.

We would eat our lunch, Osechi Ryori, we would watch Japanese variety shows, talking about who would perform at Kohaku Uta Gassen, as we will watch it as soon as it is available to watch in the States.

For dinner, my mother would make her Italian roots Lentil Soup with Cotechino Sausage. A delicious dish that brings a lot of good fortune like many meanings behind Osechi Ryori dishes.

For dessert, it would be Genmaicha and Oshiruko with grilled mochi.

Many clementines later, we lazily eat but gratefully go through about the day, wishing one another well for one more new year together. 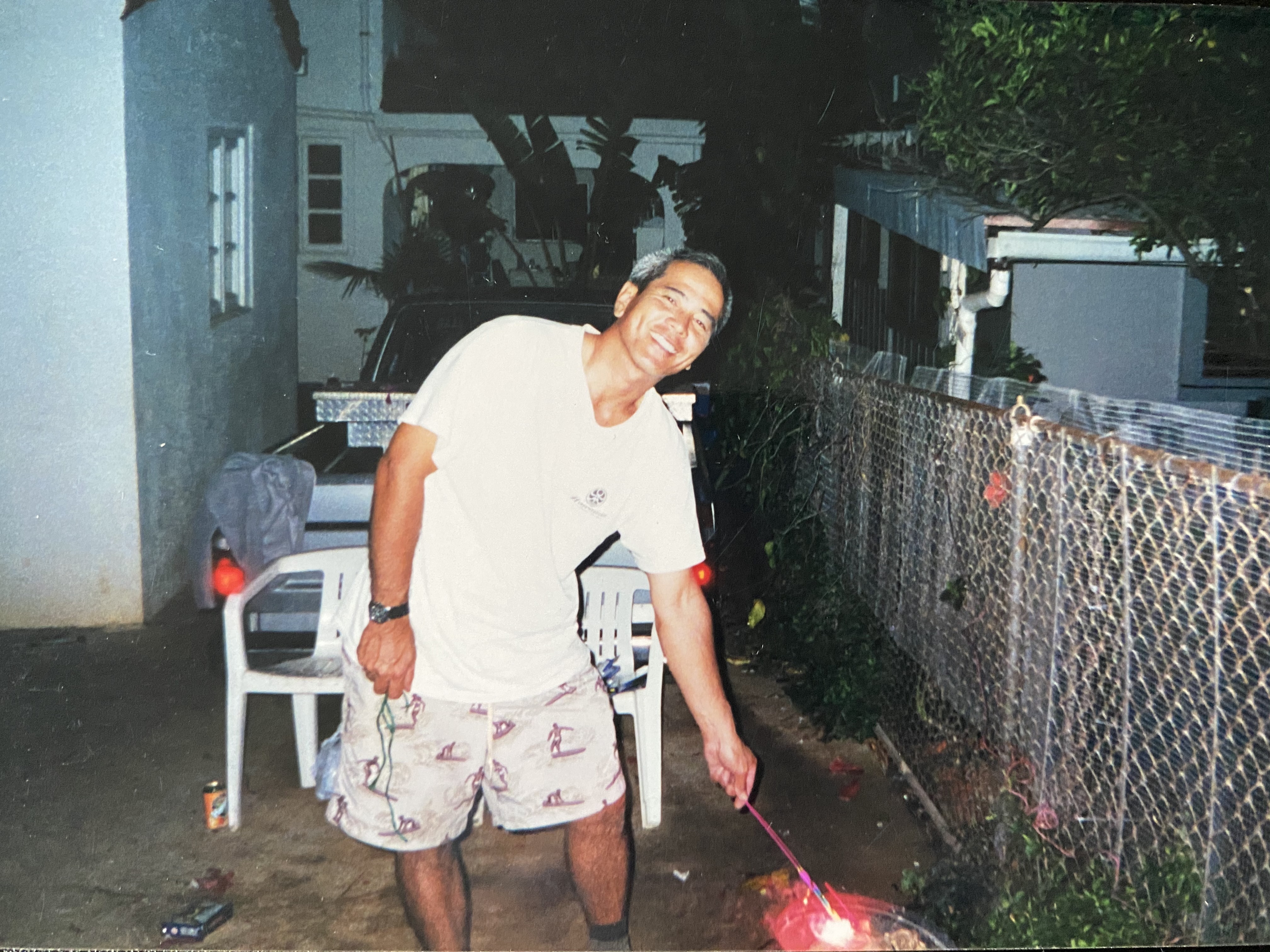 I think place is super important in how we celebrate. I grew up in Honolulu, HI in a neighborhood called Kaimuki. There, surrounded by people of mixed ethnicities, we celebrated new years together. In Hawai’i, new year’s is celebrated with food, family, and fireworks. We used to pop firecrackers on NewYear’s Eve night. The finale was always a long string if fireworks attached to a pole that was lit at midnight. Everyone had one of these in front of these houses. It was almost like a competition, whose fireworks would go on the longest! I’ve been told this tradition was meant to scare away bad spirits for the new year, but we didn’t really talk about that much.

Once the “big one” went off, my mom would usher us into the house for a small bowl of simple ozoni. There would be a few dried scallops, shitake mushrooms, mizuna, and a piece of fried mochi. Eating ozoni as the first meal of the new year was crucial, I was told, to ensure I had a good year.

On new year’s morning, we’d wake up, go outside and clean up all the debris from the night before. All of our neighbors moved around with brooms and dustpans picking up the small red paper that seemed to be all over the street.

In the evening we’d grill my mom’s famous garlic mayo shrimp and take it over to Mrs. Tsuneyoshi’s house across the street. Mrs. Tsuneyoshi was like a grandma to us. She, all of her children, and grandchildren would host a party. They set up those long Japanese low tables (you know the ones, with the lacquer finish) and passed out square cushions for everyone to sit on. We ate char sui, sushi, kimpira gobo, nishime, and my most favorite thing, layered Jell-O. Then we played bingo all night long. Every family brought small wrapped gifts that were prizes for the bingo games. When people won a round, they would go to the bin and pick a prize, maybe lifting a few and shaking them to figure out what was inside before taking it back to their seats.

I don’t live in Hawai’i anymore. I live in Seattle where I don’t know many other people who celebrate New Year’s like I did. So instead of the traditions I grew up with, my husband and I make ozoni and go to bed. 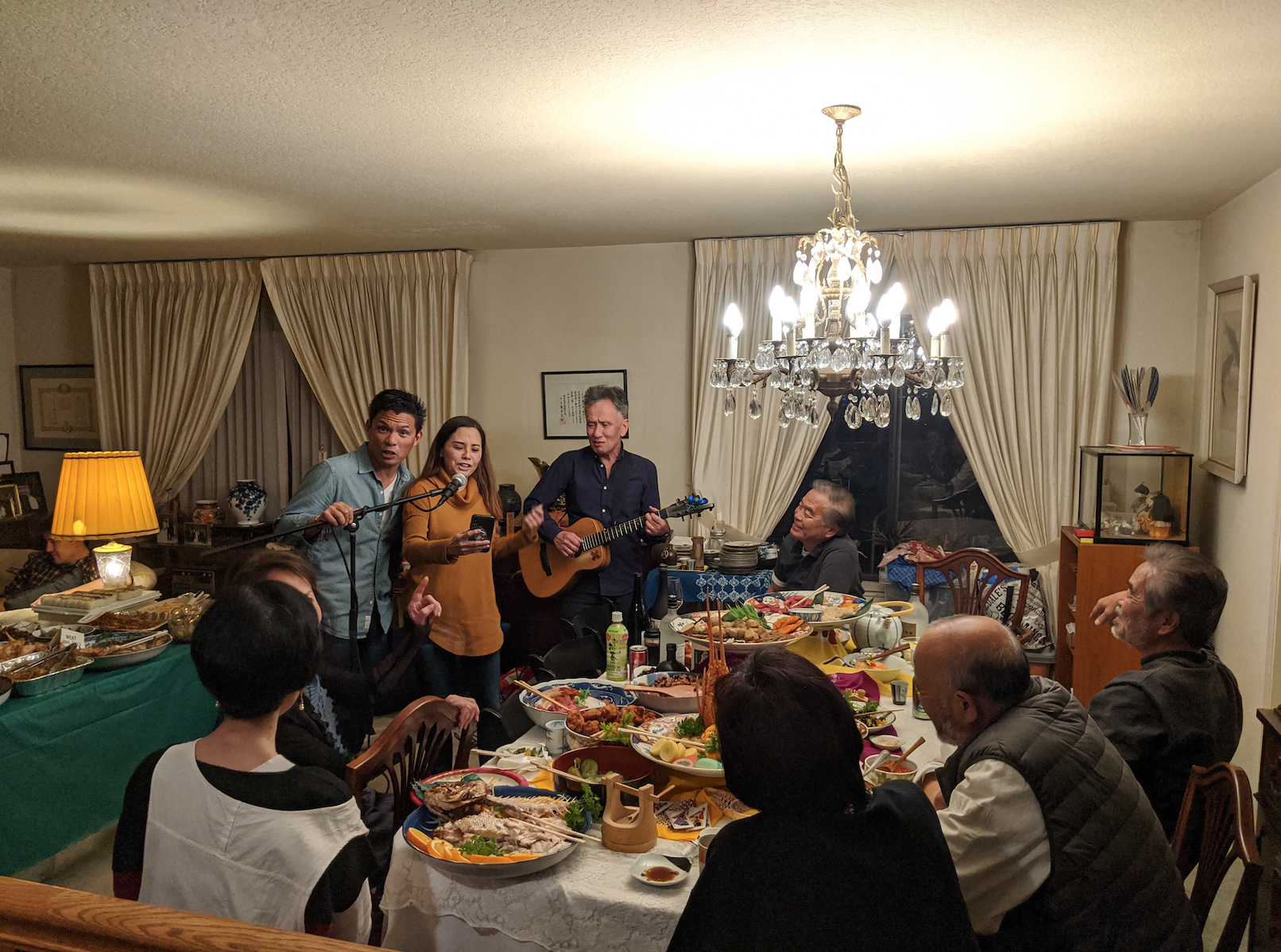 New Year's Eve and New Year's has always been at Grandma and Grandpa's house in Silver Lake. The day and night is usually spent hosting and entertaining friends and family, and I found my place at the ozoni and dishwashing station. It's been two years since the passing of my grandfather and 11 years for my grandmother. With their children (my mom, aunt, and uncles) getting older and the great-grandchildren coming in, I hope we can continue filling this space with love and warmth.

Yo! Camp: Make Magic, Every Day 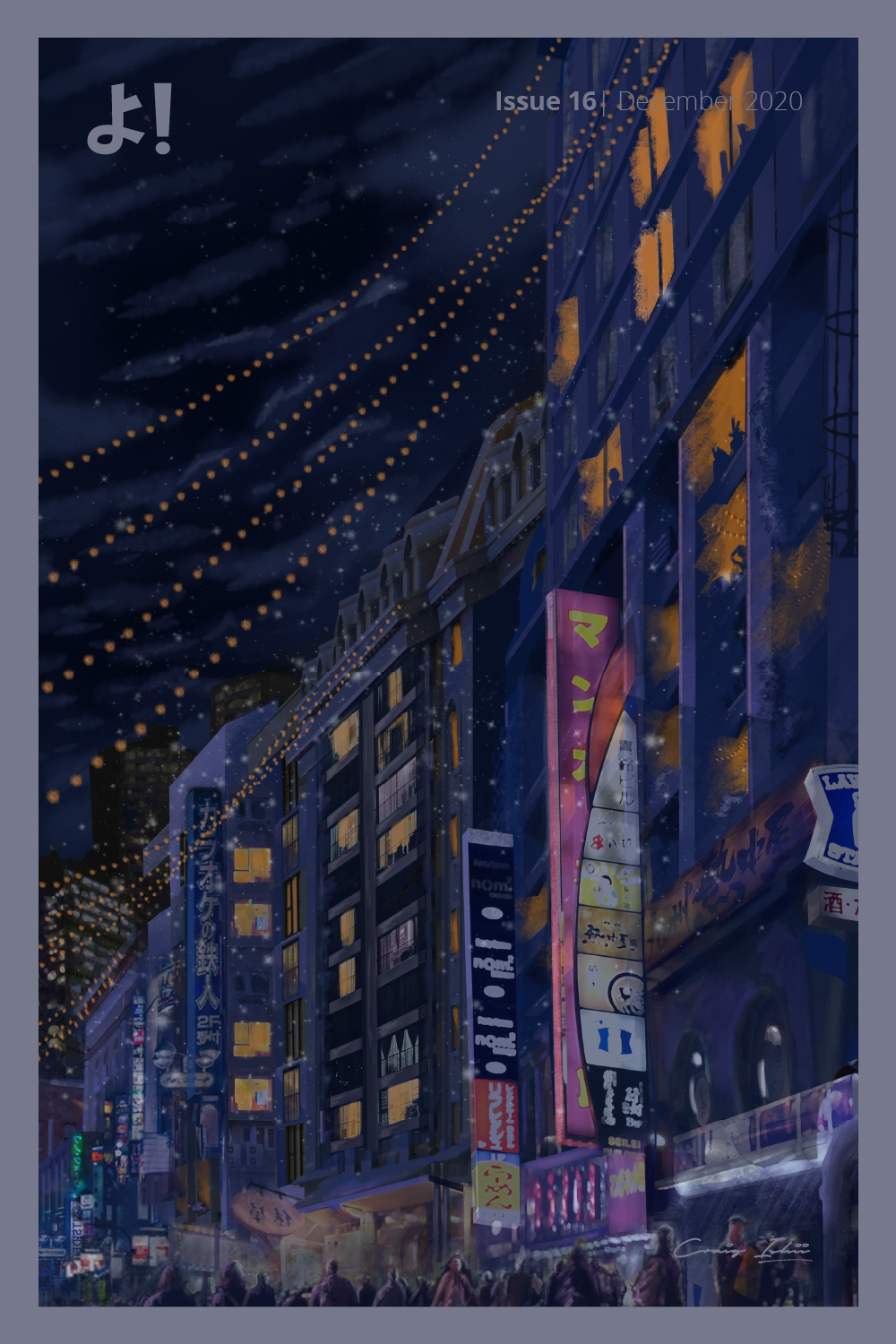 Article featured in this issue:
December 2020
Christmas Cards: Yea or Nay?
By,
Megan Nagasaki
Don't Look at These Decorations
By,
Ashley Omiya
Light Up Your Holidays With Hikari
By,
Bryce Ikemura
Making the Holidays Great (Again)
By,
Michelle Hirano

Team Yo! sits down to share our personal New Year's Resolutions. From all of us, we want to wish you a happy new year and thank you for joining us on this journey.

Christmas cards feel like a holiday staple, but not everyone feels the ~spirit~ of the exchange. Are you #TeamChristmasCards??

Take a short quiz and get yourself a good luck charm for the new year!

New to our publication? Check out our favorite articles of 2020.

We all have them. Here's a collection of the tree decorations we don't want you to see.

Kentucky Fried Chicken for Christmas. This is a thing in Japan.

To reclaim some of that missing holiday spirit this year, read about one author's visit to Tanaka Farms’ Hikari – A Festival of Lights.

In need of some holiday spirit? Check out these holiday light displays throughout Southern California!

If you're feeling like the holidays don't have the same sparkle, we got you.