Insecurities get the best of everyone.

While certain insecurities (cue Mean Girls scene) cross ethnic lines, there are certain ones that I think are specific to Asians and Asian Americans. Below is a list gathered from personal experience and from some friends. Regardless of how you may feel about certain parts of your body and face, know that these are the things that make you uniquely you. If you want to take liberties to change anything, go for it, so long as it makes you happy. It’s easy to think that someone else has something better than you, but remember, you may have some traits someone else wishes they had. 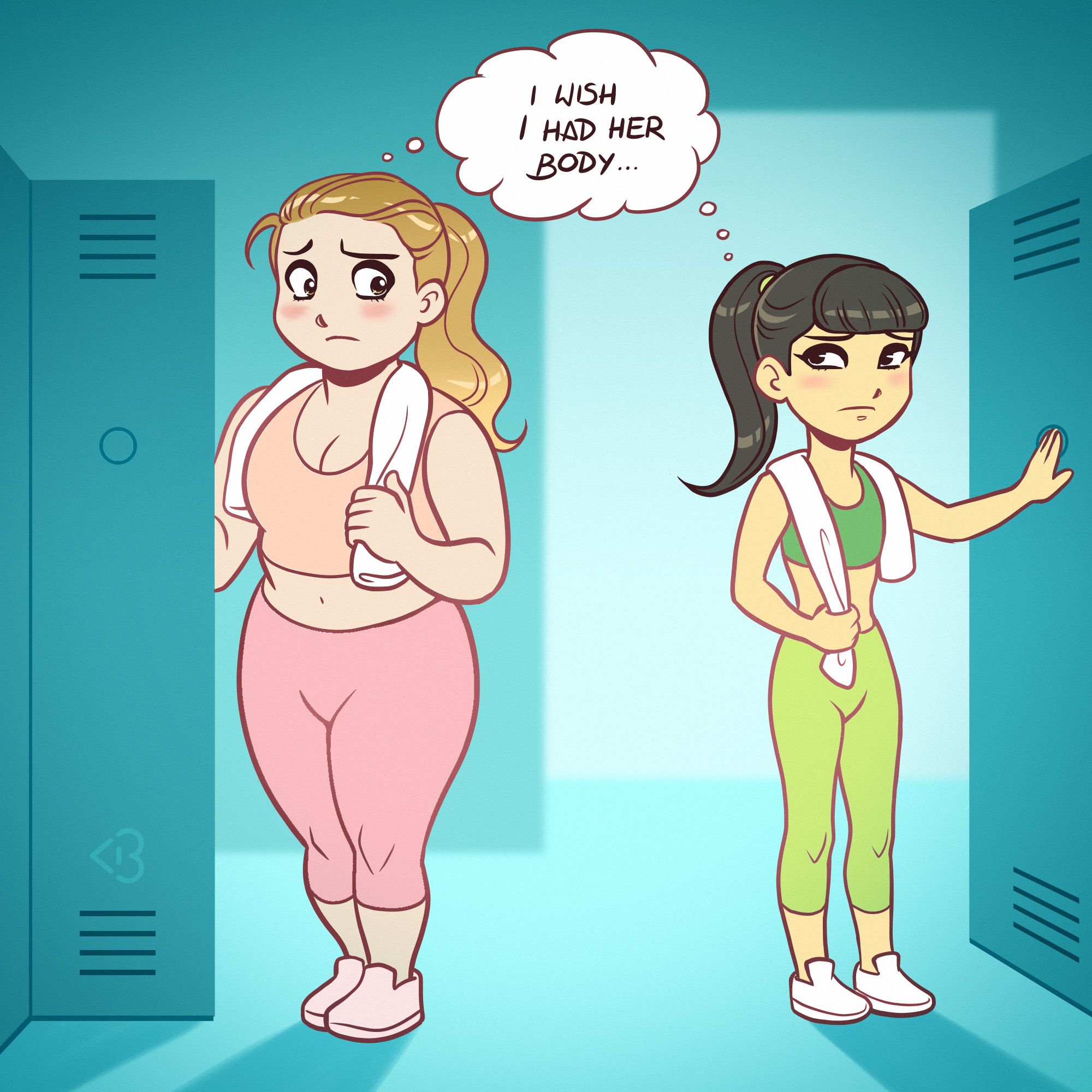 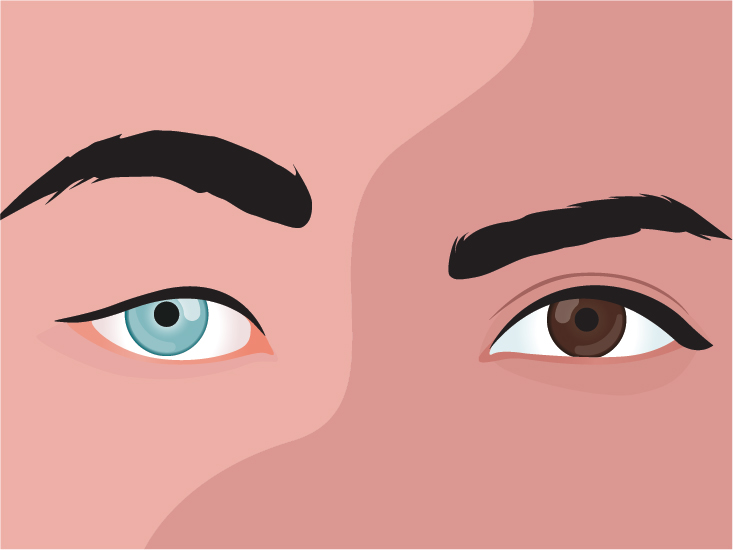 Let’s start with the easiest and most common insecurity: Asian eye shapes. I can’t begin to tell you how many times I’ve heard “where did your eyes go?” when I smile, even by other Asians. Numerous people have pulled their eyes back and called my eyes “chinky.” And I’m definitely not alone. It's racist, of course, but celebrities and influencers continue to mock Asians and their eyes, all the while considering it a “trend.” Learn to embrace your eye shape and work with what you have.

The first time I went to buy makeup for a high school dance, my mom and I walked up to the counter and the makeup artist started talking about putting a darker color in the crease. When I looked in the mirror, I had no idea what crease she was talking about. It wasn't until much later that I realized I have monolids. Since then, I’ve tried following makeup tutorials and videos on how to do certain looks and they just don’t look the same on me; I look like I took a right hook straight to the face. Luckily, now there are more videos by makeup artists and companies, like this one from Fenty Beauty, that embrace monolid makeup.

Many people our envy thick, straight hair, but what they don’t realize is that this thick, straight hair also applies to eyelashes. Many friends have given feedback on how to get their straight eyelashes to hold a curl. One tip that has worked well for me is to heat my eyelash curler with a lighter or blow dryer before using it (letting it cool to a reasonable temperature first) and squeezing the eyelash curler at multiple intervals, holding for about five seconds each time. Using a mascara with a lighter formula will also keep your eyelashes from weighing down and losing their curl over time. Our article on must-have Japanese beauty products lists some of the useful tools you can use to work with your stick-straight lashes.

Overwhelmingly I received feedback about how having a low nose bridge sucks. Western culture idealizes a slender nose with a defined bridge, often achieved by those who have wider noses with contouring. But contouring only helps slim the look of your nose. The issue of finding a pair of glasses or sunglasses that don’t move when you smile because they rest on your cheekbones instead of your nose is a prolonged experience. Getting glasses with nose pads (like aviators) can help, but we don’t want to be pigeonholed into one style of glasses! Now, companies like Jins and Warby Parker make low nose bridge glasses. With larger nose pads, adjusted lenses angles, and curved temples, these alternatively shaped glasses fit an Asian face better than others. 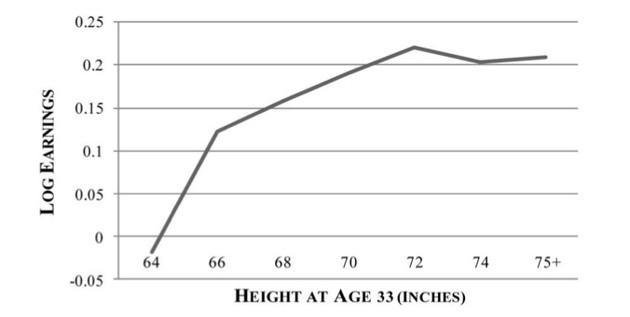 Courtesy of The Atlantic

No, I’m not talking about penis size. I’m talking about actual physical size. Asians tend to be shorter than most other ethnic groups. In a professional setting, this has a psychological effect where those who are taller seem stronger and more capable. Studies have shown that there is an actual height-salary correlation. Why else would women wear heels to work? It’s not because they’re super comfortable and easy to walk in, let me tell you. In a personal setting, especially for men, it can be a deterrent in dating. One of the first things people will set when making an online dating profile is their height preference, most often to something like 5’10” or above. How many Asian men can say that they meet that threshold? Or say you’re in a bar, who are the first people you look at? While there isn’t anything you can do to grow, you can stand with confidence to give the appearance of being taller and more commanding. Pull your shoulders back, keep your chin up, and you can do some of these stretches that Cassey Ho, founder of Blogilates, recommends to help with your posture.

Ok, now I’m actually talking about dicks. Asian men have been constantly emasculated through mainstream media, always playing the nerd or sidekick in movies and TV shows. An often-used joke, and sometimes self-deprecatingly, is about how Asian guys have small dicks. So of course, this feeds real-life perception of Asian men, who are the lowest desired group amongst straight women in online dating. There is no scientific proof that Asian men have smaller penises than any other ethnic group. And I am a firm believer that it’s not the size of the tool, but in how you use it. So, don’t knock it ‘til you try it. And fellas, there are plenty of things you can do in bed to make sure your partner is satisfied. I won’t list them here; you can do that research on your own (maybe with your partner as a fun activity). 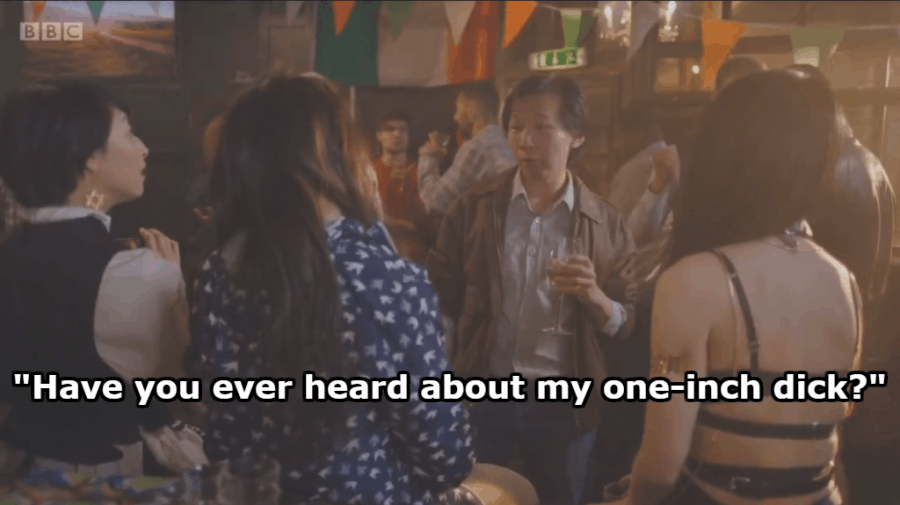 A lighter skin tone has always been coveted in Asian culture. Going back centuries, light skin signified aristocracy because one did not have to work outdoors to make a living. Nowadays, light skin is associated with Western beauty (although Western culture has taken a liking to tanning beds and spray tans). Skin whitening products have popped up all over the Asian skincare market. I’ve been told that darker skin toned friends have been called “dirty” by others. Thankfully, there have been colorism movements, especially in the South Asian community, that are fighting the stigmas associated with darker skin tones. So, keep your heads up, my fellow tan friends -some people only wish they could have our pigmentation.

We all have insecurities that we harp on. Your identity as a person is not solely defined by your physical appearance. Insecurities exist because we are comparing ourselves to others who set extreme or often unattainable standards. What you are insecure about likely stems from something biologically a part of you that is out of your control. What you can control is your attitude towards those features, how you handle them, and what you are like on the inside. They say don’t judge a book by its cover, and this idiom couldn’t be more on the flat, wide Asian nose (I will see myself out…) While it is true that your physical attributes help develop your identity, they do not define you as a whole. If you are able to embrace who you are, inside and out, you can be confident that all of your features and traits combined make you uniquely you. In the words of Christina Aguilera, you are beautiful no matter what they say. 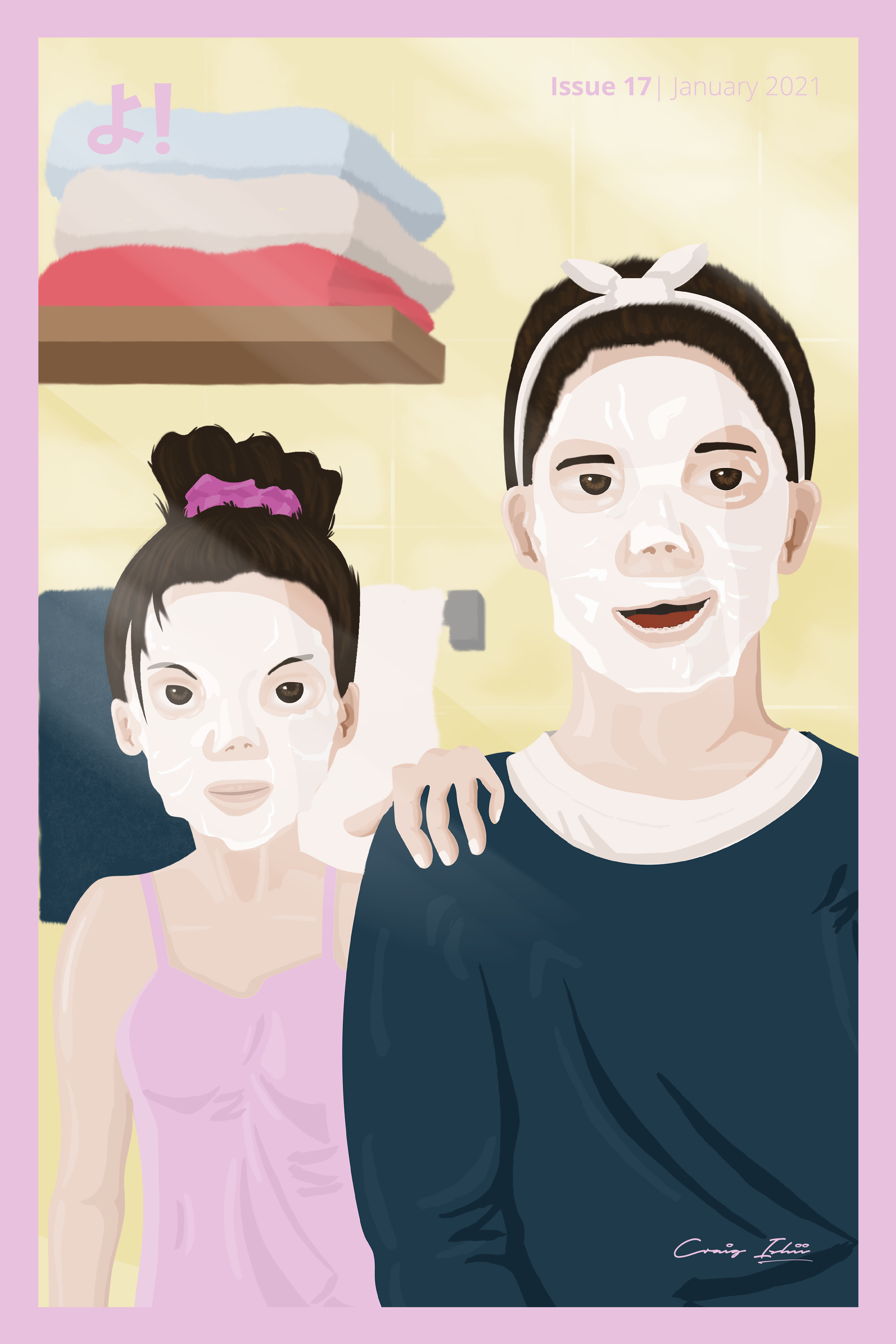 Article featured in this issue:
January 2021
Background Beauty
By,
Megan Nagasaki
Beauty Is in the Eye of the Beholder
By,
Kerilyn Sato
The Hottest People We Know
By,
Philip Hirose
Dressing up for the Digital World
By,
Philip Hirose