My parents were once a pair of twenty-somethings in nineties California, working and newly free from the rules of their parents’ homes. To celebrate, they planned a road trip up the coast of California together. The plan: Van Nuys to San Francisco, via the Pacific Coast Highway. They checked all the boxes: Solvang, Hearst’s Castle, Big Sur, Carmel-by-the-Sea, the Santa Cruz Boardwalk, the Winchester House. They bought the magnets, took the photos, and gawked and gasped at whatever the California sun shined on.

Later, wishing to share vast, sunny California with their kids, my parents brought us first to Solvang. Up the 126 from Los Angeles, past almost three hours of green orchards in oscillating rows lies Solvang, the “Danish Capital of America,” nestled in Santa Ynez Valley. Founded in 1911 by Danish Americans from the Midwest looking to establish a Danish colony on the West Coast, Solvang has since become a popular tourist spot, a small town of picturesque “Danish provincial” style architecture complete with clock towers, windmills, and spires. 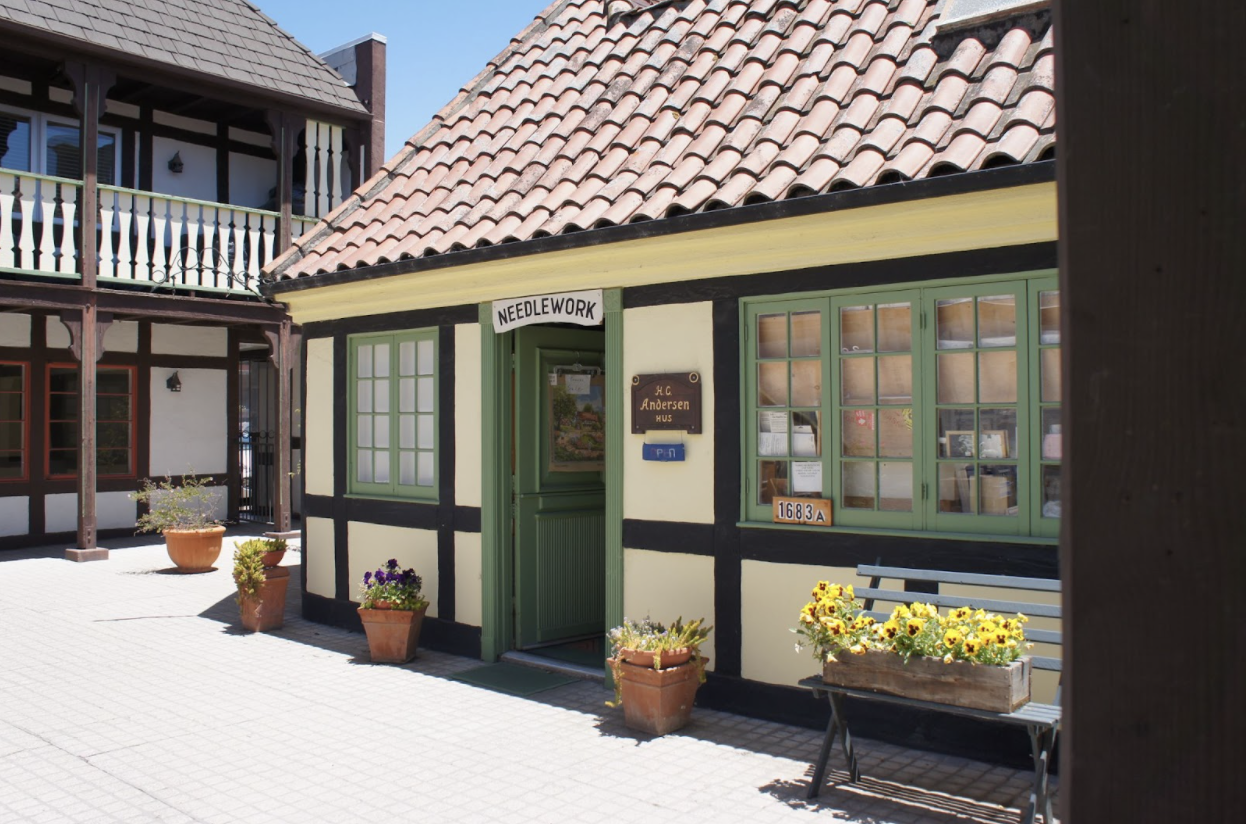 My parents love Solvang, so every several years we take a pilgrimage up to the “Danish Capital of America.”

On these trips I sleep in the car, but I always wake up before the landmark Pea Soup Andersen’s billboard passes by, interrupting the stretch of grass with two illustrated chefs in lofty white hats in a green bowl next to the words “Home of Split Pea Soup: Everything For the Traveler.”

Following the billboard’s instructions, we take the next exit, passing the Danish provincial style building with “ANDERSEN’S” erected from the roof in large cornflower rectangles and white, Old English type lettering. We park in a back lot behind the residential homes, small neat houses trimmed with plush gardens.

On Main Street, next to the lines of half-timbered buildings with dark beams cutting geometric shapes into the white, red, yellow facades of the buildings, the tiled roofs a range of browns and mint greens, the gray, smooth pavement looks out of place. A horse-drawn carriage carrying an older couple, pointing at the sights, trots by, confirming to me that a cobblestone street would be more appropriate.

The signs of shops hang from the storefronts, wooden boards of various shapes—a shield or a boot—but all with the same Old English lettering. In front of a shoe store, a giant red wooden clog sits on a platform, a child climbing into it dutifully for his parents, who have their camera in hand. It’s all charming, but I can’t help but feel like it seems a bit too well-groomed, too commercial. An adjacent pub hides its stucco behind crawling green ivy, and my parents march on, my siblings and I in tow. 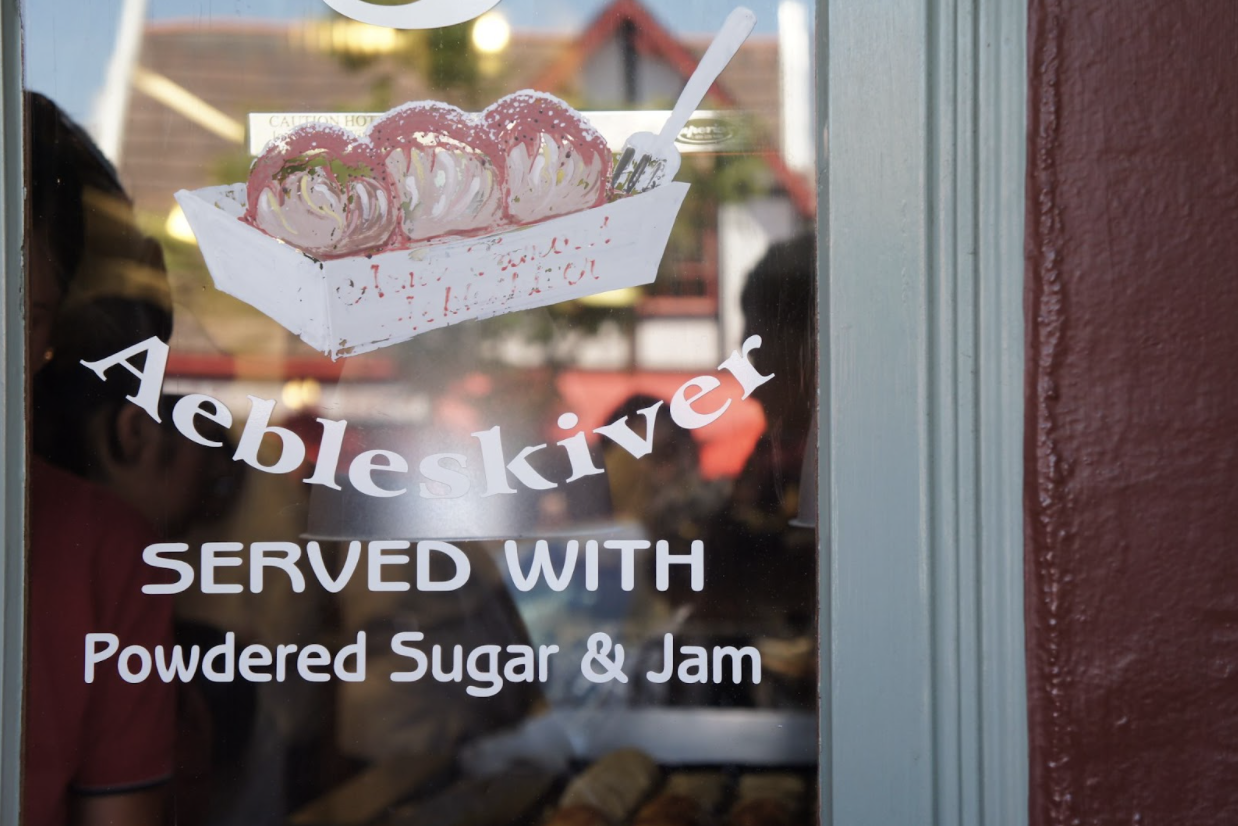 We stop at one of the Danish bakeries, ordering aebleskiever (ay-bluh-skee-vr) through a window from a brunette wearing a traditional Danish dress with white-capped sleeves. She hands us the balls of dough in a flimsy paper tray—fluffy masses drowning in red raspberry jam and copious amounts of powdered sugar.

My father gleefully calls out “Aebleskeiver!” before wincing at the too-sweet treat.

One after the other, we peruse the merchant shops dedicated each to cuckoo clocks, leather goods, and turquoise jewelry. While my mother takes her time looking through boxes of cross stitching patterns in a needlework shop tucked away in a back courtyard, my siblings and I mill about the overgrown ferns outside. At the green knolls of the central park, we pay our respects to the bust of Hans Christen Andersen, the fairytale writer immortalized in bronze, and remember his collection of stories we read together at home.

Finally, we make it to the famous windmill. As we wait out the two elderly tourists taking their photos in front of the distinctive landmark, I stare at the white monolith with its red vanes, somewhat puzzled. I know they will never turn.

It’s merely a novelty—so why does it charm my parents so?

My sister, not quite as impressed with the town as my parents are, likens our visits to Solvang as “limbo,” or being stuck in an in-between. I understand this comparison; because of its half-timbered facades and smiling shopkeepers in Danish dress, Solvang feels at once stuck in time and in conflict with its traditional and commercial interests. 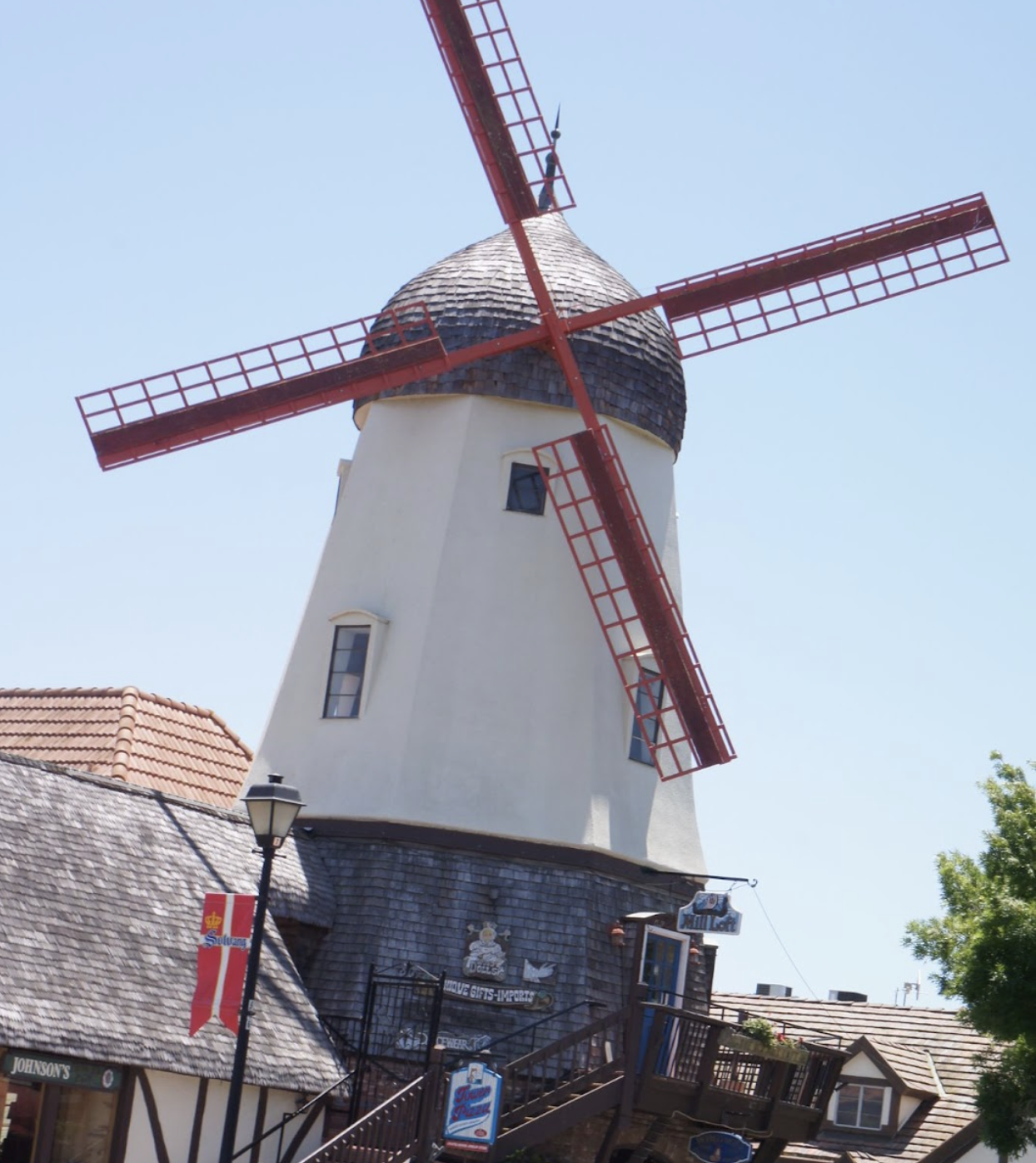 Perhaps that is why, even after all these many visits, I’ve remained skeptical, never quite understanding my parents’ love for the town that has compelled them to return again and again over the decades.

Only recently have I learned that in Danish, Solvang means “sunny field.” I like to think that this name is indicative of what the town’s Danish founders thought of the land—an open, verdant plain that promised potential, a new beginning. It helps me understand the value my parents have placed on Solvang.

I imagine this sunny field, then my parents as young adults, on the road to discover California for themselves, together. And for the first time, my skepticism fades.

In my family’s collection of photo albums, I find one of my parents: fiancées visiting Solvang for the third time, posing in front of the same windmill in their baggy shirts with jackets tied around their waist. My parents both hold a hand up to their foreheads, shading their eyes as they squint at the camera. The California sun is too bright for them, but they are smiling. They don’t care that its vanes will never turn. They only care that they are there when they return, next time. For the next photo.

Pauline is a mixed Filipino and Okinawan nisei who grew up in the suburbs of LA. She loves crosswords, journaling, and G2 0.38 gel pens. On an ideal day, you can find her climbing tall rocks outdoors

More by this author >>
Related Articles in
Diaspora
Family
Traditions

What Kind of Mom Are You?

Article featured in this issue:
November 2021
This Article is About Family Therapy
By,
Craig Ishii
DnD - Dice Advice
By,
Mariko Fujimoto
Following Family Recipes: A Saga
By,
Megan Nagasaki
8 Things You Remember If You Had AZN Pride
By,
Michelle Hirano